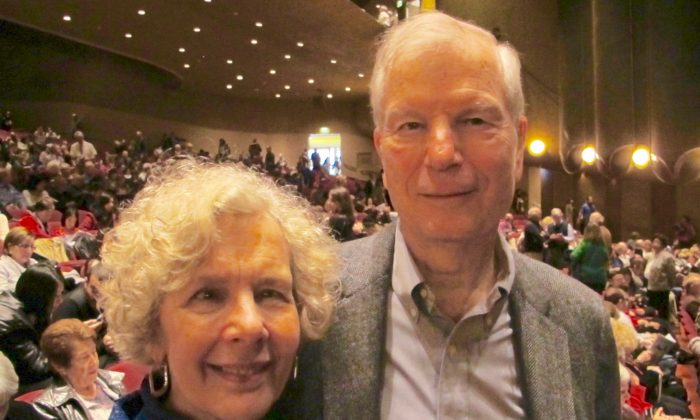 David and Lynn Mitchell enjoy Shen Yun at the San Jose Center for the Performing Arts on Jan. 3, 2016.

Based in New York, Shen Yun has a unique mission: to revive China’s traditional culture through classical Chinese dance and music. The company creates an all-new performance every year, drawing inspiration from China’s 5,000-year history.

The Mitchells watched the afternoon performance at the San Jose Center for the Performing Arts on Jan. 3.

Ms. Mitchell admired the expertise of the dancers and the way they danced with “immaculate precision.” She felt the costumes and technology were unique, and the colors and lighting were dazzling.

According to Shen Yun’s website, the dancers wear brilliantly-colored costumes from China’s many dynasties and ethnic groups. The costumes are handmade and include imperial dragon robes and flowing silk “water sleeves.”

Ms. Mitchell was fascinated by Shen Yun’s state-of-the-art digital backdrop, which transports the audience to ancient Chinese landscapes and even heavenly palaces, according to Shen Yun’s website.

The dancers are accompanied by a one-of-a-kind live orchestra that combines Eastern and Western musical traditions. Through music and dance, Shen Yun tells stories and legends from China’s history, both ancient and modern.

The Mitchells visited China in 1989, and Mr. Mitchell noticed the difference between the culture presented in Shen Yun and what they saw in China.

“This is just a whole aspect of Chinese culture we didn’t see,” he said. “It’s certainly emphasizing more of the spiritual side of China. … This is a totally different impression.”

Shen Yun’s website explains that ancient Chinese values such as kindness, wisdom, and respect for the heavens were passed down for thousands of years but nearly destroyed by the communist regime in modern times.

These values are brought back to life in each Shen Yun performance. For this reason, Shen Yun cannot perform in China today.

Mr. Mitchell said he felt mesmerized during much of the performance, but one dance piece left an impression on him. The piece portrayed the persecution of Falun Dafa, a traditional Chinese spiritual practice based on truthfulness, compassion, and tolerance, which has been persecuted in China since 1999.

The dance story depicted the violence that is committed against these meditators, but Mr. Mitchell also found that it ended with a peaceful outcome.

“We just don’t realize in this country what we take for granted,” his wife said. “They cannot follow their heart, listen to their conscience, and honor the spirit in the way that their heart speaks to them.”

The Mitchells sat close to the stage, where they had a good view of the dancers.

“We can see their expressions and their seeming peace with what they’re doing,” Mr. Mitchell said. “Their expressiveness is very apparent.”