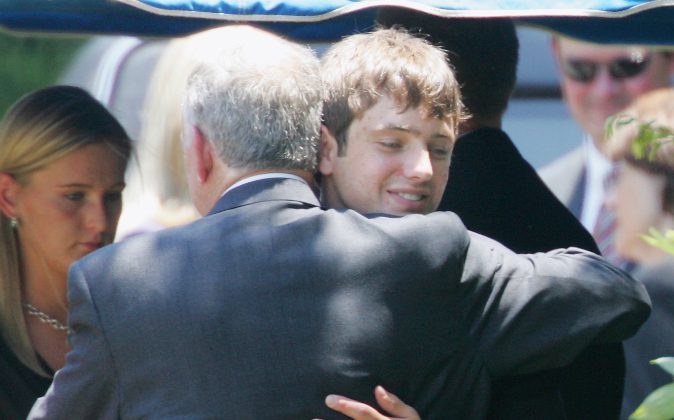 In this June 29, 2006, file photo, John Ramsey hugs his son, Burke, facing camera, at the graves of his wife, Patsy, and daughter JonBenet, during services for his wife at the St. James Episcopal Cemetery in Marietta, Ga. Burke Ramsey filed a $150 million lawsuit against Werner Spitz after he claimed Ramsey killed his sister, Jon Benet on Oct. 7. (AP Photo/Ric Feld, File)
US

Lawyer for JonBenet Ramsey Family to Sue CBS Over Documentary

The Ramsey family have decided to take legal action against CBS after the airing of the network’s documentary, “The Case of: JonBenet Ramsey” depicted the family in a negative light.

“I will be filing a lawsuit on behalf of Burke Ramsey,”attorney L. Lin Wood said in an interview with Reuters on Sept. 21. “CBS’ false and unprofessional attacks on this young man are disgusting and revolting.”

The finale of the two-part, four-hour documentary that aired on Sept. 19, implicated Burke Ramsey as the killer of his sister and child beauty queen JonBenet. JonBenet was found brutally beaten and strangled in the family’s home two decades ago. Investigators concluded that then-9-year-old Burke accidentally killed his sister after the two sparred over pineapples.

“I think if Burke was upset about circumstances or Christmas presents, he probably would have been upset about her trying to snag a piece of pineapple—out of anger he may have struck her with that flashlight,” said former chief investigator James Kolar.

The investigators—Kolar, former FBI profiler Jim Clemente, forensic scientist Henry Lee, and forensic pathologist Dr. Werner Spitz—theorized that the Ramsey family deliberately sabotaged the investigation of the case to protect Burke, who has denied any involvement in the murder.

Wood said the documentary was filled with “lies, misrepresentations, distortions and omissions” as a ploy to obtain high ratings. According to TV By The Numbers, 8 million viewers tuned in on Monday night.

CBS responded to Wood’s claims in a short statement that read: “CBS stands by the broadcast and will do so in court.”

In 2008, parents John and Patsy Ramsey—the latter passed away in 2006 from ovarian cancer—along with Burke, were cleared of criminality after DNA evidence led to the trio’s exoneration. Then-District Attorney Mary Lacy penned a letter to the family, apologizing for the accusations that dogged them.

“To the extent that we may have contributed in any way to the public perception that you might have been involved in this crime, I am deeply sorry: No innocent person should have to endure such an extensive trial in the court of public opinion, especially when public officials have not had sufficient evidence to initiate a trial in a court of law. I have the greatest respect for the way you and your family have handled this adversity,” Lacy wrote.

To this day, the case remains unsolved.