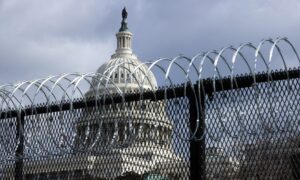 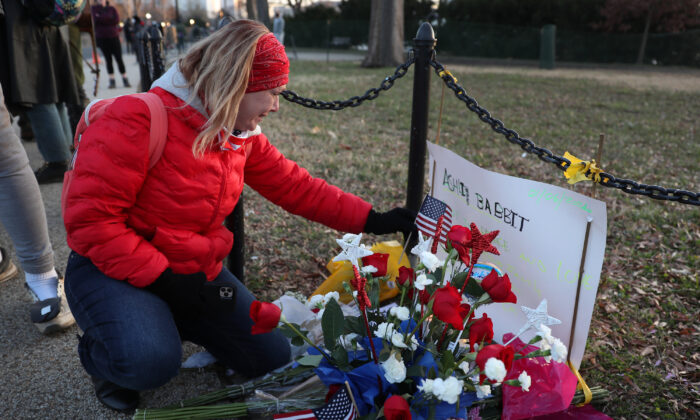 Melody Black, from Minnesota, visits a memorial setup near the Capitol Building for Ashli Babbitt in Washington, on Jan. 7, 2021. (Joe Raedle/Getty Images)
US News

The family of Ashli Babbitt, the only person shot during the Jan. 6 breach of the U.S. Capitol, plans to sue the police department and the officer who fired the gun for at least $10 million, their attorney said.

Terry Robert, the family’s attorney told Zenger News’ David Martosko in a report first by published Newsweek, that they plan to sue both the Capitol Police and the officer for wrongful death, and will be seeking $10 million in damages in federal court.

The lawsuit comes after the Department of Justice (DOJ) announced on April 14 that it would not file criminal charges against the officer who killed Babbitt.

The U.S. Attorney’s Office for the District of Columbia and the DOJ’s Civil Rights Division decided jointly not to pursue charges against the officer, who has not been publicly identified.

Babbitt, a decorated U.S. Air Force veteran, was unarmed when she joined others in storming the U.S. Capitol in Washington during a joint session of Congress in January.

The 35-year-old was shot while trying to climb through a broken window into the Speaker’s Lobby, adjacent to the House chamber.

She was transported to Washington Hospital Center, where she died, the DOJ said. She left behind a husband, Aaron, and four younger brothers.

Babbitt’s death was caused by the gunshot, which hit her left shoulder, the D.C. Office of the Chief Medical Examiner ruled earlier this month. The manner of death was homicide.

“A rookie police officer would not have shot this woman,” Roberts told the news outlet. “If she committed any crime by going through the window and into the Speaker’s Lobby, it would have been trespassing. Some misdemeanor crime. All a rookie cop would have done is arrest her.”

“And he has plenty of other officers there to assist with arrest,” he said of the shooter. “You had officers on Ashli’s side of the door in riot gear and holding submachine guns. And on the other side of the door you have another uniformed officer 6 or 8 feet away. Whose life is he saving by shooting her? … She’s not brandishing a weapon. She’s on the window ledge. And there’s no reason to think she’s armed.”

Roberts said the $10 million figure was a “good estimate” and noted that economic losses from Babbitt death would likely total $2 million.

Non-economic claims, such as punitive damages, would push the sum far higher, he added.

Roberts added that “within the next ten days” he will serve notice to U.S. Capitol Police that he intends to file suit in Federal District Court in Washington, D.C.

Unlike some other jurisdictions, the District of Columbia has no practical monetary limit on the damages a family can recover in a wrongful death lawsuit.

The U.S. Department of Justice said in an April 14 press release that it had closed its investigation without filing criminal charges against the officer involved in the fatal shooting of Babbitt.

The press release said the investigation “revealed no evidence to establish that, at the time the officer fired a single shot at Ms. Babbitt, the officer did not reasonably believe that it was necessary to do so in self-defense or in defense of the Members of Congress and others evacuating the House Chamber.”

On Jan. 6, a group of rioters and some protesters breached the U.S. Capitol while lawmakers were counting Electoral College votes. Thousands of other protesters peacefully protested outside the building, while one protester was fatally shot by Capitol Police, one—a lady was trampled—died from acute amphetamine intoxication, one died of a heart attack, and another from a stroke.

Capitol Police Officer Brian Sicknick died from a stroke on Jan. 7, and though Capitol Police originally linked his death to the Jan. 6 breach, Washington’s chief medical examiner declared his death was from natural causes.

The Capitol Police did not immediately respond to a request for comment.