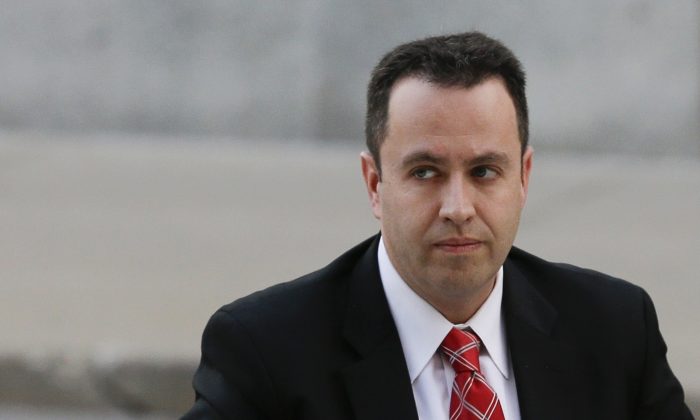 INDIANAPOLIS—Subway’s former pitchman imprisoned for child pornography and sex abuse is arguing in a court filing that the parents of one of his female victims are to blame for what he describes as her “destructive behaviors.”

Jared Fogle’s motion filed Thursday in U.S. District Court in Indianapolis also argues that the parents may be responsible for the girl’s injuries alleged in a civil lawsuit against him.

The victim was a subject in some of the child pornography in Fogle’s criminal case and filed a lawsuit against him in March. It seeks monetary damages for, among other things, personal injury and emotional distress.

Fogle’s filing alleges the parents fought and abused alcohol in front of her. It argues that’s among the causes of her distress and contends the parents may be liable for some or all of her claims against Fogle.

Fogle was sentenced in November to more than 15 years in prison after pleading guilty to distributing and receiving child pornography and traveling out of state to engage in illicit sexual conduct with a minor. Fogle has paid restitution to his victims, but they can still sue him and seek additional money.

The parents are not named in the court documents, and the victim is referred to only by the pseudonym “Jane Doe.”

The victim’s lawsuit, which seeks at least $300,000 in damages, names Fogle and the former head of his anti-obesity charity, Russell Taylor. Taylor’s wife is also a defendant in the suit.

Prosecutors who charged Fogle and Taylor last year said Taylor used cameras hidden in the Indianapolis-area homes where he lived to secretly film 12 minors and shared some of the images with Fogle. The pornography was produced over a four-year period.

The Indiana girl suing was among those filmed and has suffered “significant emotional trauma,” her attorney M. Michael Stephenson said around the time the suit was filed.

The girl’s attorneys didn’t immediately respond to an after-hours inquiry from The Associated Press seeking comment on the latest filing.