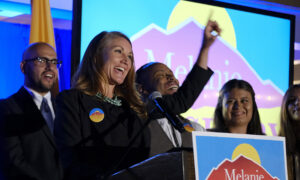 Lawmakers Awarded for Bipartisanship in a Highly Divided Congress

WASHINGTON—The U.S. Congress is becoming increasingly polarized and divided, although there are still a number of lawmakers who are willing to work across the aisle “to do what’s right for the country.”

The U.S. Chamber of Commerce presented awards on June 17 to members of Congress who the organization says are committed to “bipartisanship” and “constructive governing.”

Since 2019, the business organization has been measuring bipartisanship by recording how often members cosponsor legislation introduced by members of the opposite party. It also tracks members who play an important role in advancing policies that support America’s free enterprise system.

“Every single sustainable policy solution in the history of our country has been bipartisan,” Rep. Brian Fitzpatrick (R-Pa.) said on June 17 at a virtual event hosted by the Chamber.

Fitzpatrick is the top House winner for bipartisanship this year, receiving a 100 percent score, according to the list announced by the Chamber.

“The party line solutions typically get uprooted four to six years later, whenever the pendulum swings in the other direction,” Fitzpatrick said. “But it’s the bipartisan solutions that get the policy right and reject the extremes.”

Fitzpatrick co-chairs the Problem Solvers Caucus, a 58-member coalition in the House of Representatives. The caucus, which is equally divided between Democrats and Republicans, seeks to forge bipartisan cooperation on key policy issues.

This year, 32 lawmakers—10 senators and 22 representatives—who received top scores on bipartisanship were awarded the Jefferson-Hamilton Award for Bipartisanship by the Chamber.

The organization also presented the Abraham Lincoln Leadership for America Award to 34 lawmakers—11 senators and 23 representatives—who got the highest marks on co-sponsoring bills that are important to the business community.

Speaking at the virtual event, Rep. Henry Cuellar (D-Texas) who is the top winner of the Abraham Lincoln Leadership award, stressed the importance of the durability of policies.

“People feel that when your party’s in the majority, they act like it’s going to be there forever. Nothing’s forever,” Cuellar said at the virtual event.

“If the majority passes something on a straight party vote, what’s going to happen when the Republicans are in charge? They’ll go after the Democratic proposals and vice versa. Health care is one example.”

Cuellar, who has been a vocal critic of the Biden administration on immigration, said the country needs new immigration reform done in a bipartisan fashion.

Bipartisanship in the U.S. Congress has diminished in recent years as the parties have become increasingly polarized. Lawmakers who engage in compromise to get important bills across the finish line face pressure from their colleagues, especially from the more extreme wings of their parties.

A recent study by the Institute for Policy Research at Northwestern University, however, showed that bipartisan lawmakers are actually more effective.

“Our findings indicate that those Representatives and Senators who attract a more balanced proportion of Democratic and Republican cosponsors to their bills are, indeed, more effective lawmakers than are more partisan legislators,” the researchers wrote.

Members who can attract support from across the aisle have a greater chance of advancing their bills through committee and into law, according to the study, which is based on a dataset of representatives’ and senators’ sponsorship and cosponsorship decisions on all bills introduced between 1973 and 2016.

“We have to be willing to meet halfway, 60, or 70 percent, whatever it takes to do what’s right for the country,” Rep. Don Bacon (R-Neb.) said at the virtual event. “I think we don’t have that culture right now in Congress. It’s 100 percent, if you’re in the majority, is sort of the rule of thumb.”

Bacon received one of the top scores in the House for the leadership award.

Sometimes, the distance between both parties is too great, said Rep. Abigail Spanberger (D-Va.) “but a lot of times, it’s just about finding the path to build that coalition.”

Speaking at the virtual event, Spanberger said if there is no conversation, “then you never know why the other side of the aisle disagrees with you when something seems eminently reasonable.”

This year, top Senate winners who received 100 percent scores were Sens. Kyrsten Sinema (D-Ariz.) for both leadership and bipartisanship, Thom Tillis (R-N.C.) for leadership, and Susan Collins (R-Maine) for bipartisanship.