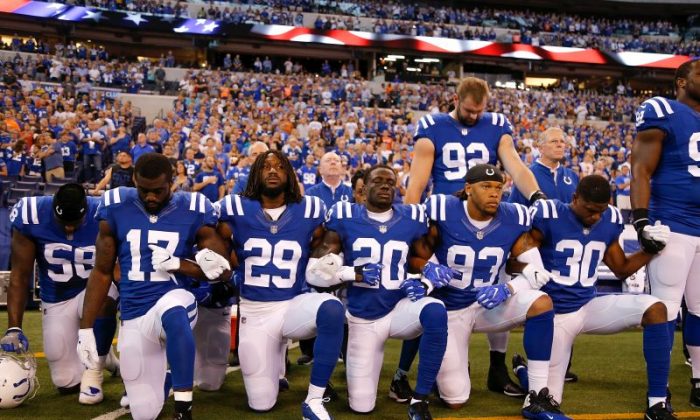 A lawmaker in Indianapolis filed legislation for fans to get their money back when Indianapolis Colts players kneel during the national anthem before games.

Republican Rep. Milo Smith told the Indianapolis Star that kneeling is disrespectful to the government. “It didn’t sit right with me,” he said of his feelings when he saw players kneel for the anthem in September.

Smith’s bill has not yet been approved. According to Yahoo Sports, the proposal would require the Colts to give refunds if Colts players protest—not members of the opposing team.

On Oct. 8, Vice President Mike Pence walked out of a Colts game after members of the San Francisco 49ers took a knee during the national anthem.

Pence wrote that he won’t “dignify any event that disrespects our soldiers, our Flag, or our National Anthem.”

Earlier this month, a New Orleans Saints fan filed a lawsuit against the team to try and get a refund for season tickets, saying that his experience was adversely impacted by players protesting.

Lee Dragna, the fan, claimed in the lawsuit that he had purchased the tickets for “entertainment and intellectual enjoyment” for his family and himself and said he would not have purchased them if he knew players would “use Saints football games as a platform for protests,” ESPN reported.

A source said the Saints are “taking this very seriously, and this fan best have his facts in order,” ESPN reported.

“The Saints will come back at this fan who has brought forth incorrect information in his statement with everything to defend the team, organization, and players,” the source added.

The NFL anthem protests were started last year by out-of-work quarterback Colin Kaepernick, who started kneeling during the preseason. Other players followed suit, but the issue was reignited when President Donald Trump said at a rally in September that players who protest the anthem should be fired. The following Sunday, scores of NFL players protested before games.