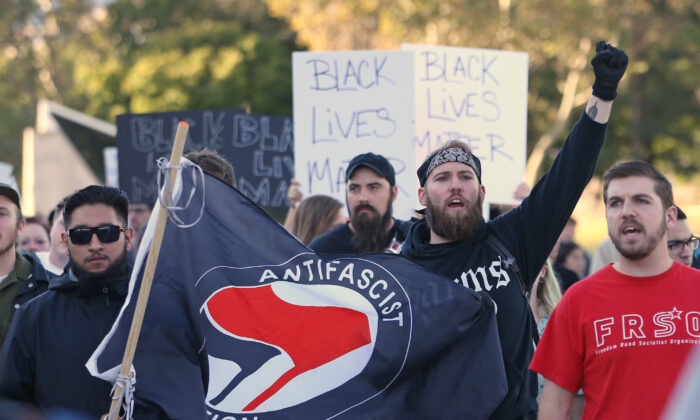 Antifa protesters demonstrate on the University of Utah campus against an event where right wing writer and commentator Ben Shapiro is speaking in Salt Lake City, Utah, on Sept. 27, 2017. (George Frey/Getty Images)
US News

Jonathan Turley, the constitutional law professor who served as the sole Republican witness during the impeachment inquiry of President Donald Trump, has now warned about an anti-free speech movement on college campuses.

Turley, who teaches at George Washington University, testified on Tuesday before a Senate subcommittee during a hearing that aimed to examine the protection of free speech and prevention of violent demonstrations.

According to Turley, far-left anarcho-communist group Antifa, unlike other extremist groups that also commit violence during protests, is particularly dangerous because it’s part of a nationwide anti-free speech movement that uses intimidation tactics to prevent ideological opponents from expressing their views.

“If you go through the Antifa handbook and look at their literature, it’s quite express, as stated in the handbook, they reject the premise of what they call a classical liberal view of free speech,” Turley said. “Specifically they object to statements like, ‘I may disagree with what you have to say, but I would give my life to defend it.’ They reject that. They believe that free speech itself is a tool of oppression.”

“Many of us on campuses have been dealing with Antifa for years, and Antifa is winning,” Turley said, adding that he had never seen the same level of fear and intimidation on campuses today throughout his 30 years of higher education career.

“Faculty are afraid to speak out about issues,” he continued. “We can’t have a dialogue about the important issues occurring today because there’s a fear that you might be accused of being reactionary or racist. We’ve had law professors who have been physically attacked, have required police protection. That’s the environment that we’re developing.”

Turley moved on to warn those who see these self-proclaimed anti-fascists as allies that they “don’t know Antifa.”

“Those of us who have been teaching on campuses can tell you about these groups,” he said. “And the alarm that I have is because I’m watching my profession, the teaching profession, die, with free speech.”

When asked by Sen. Ted Cruz (R-Texas) if he thought it was harmful for Minnesota Attorney General Keith Ellison to post a picture of himself holding an “Anti-Fascist Handbook” on Twitter, Turley said he noted that some Democratic politicians have not only failed to denounce Antifa, but endorsed it.

“And when you see pictures like Mr. Ellison’s picture with Antifa, it’s very disturbing because Antifa’s not coming after him,” he continued. “They’re not even coming after Democrats. They’re coming after Republicans, conservatives, and those of us in the free speech community.

“They’re coming after us. But don’t think we’ll be the last ones. That’s not how this works.”