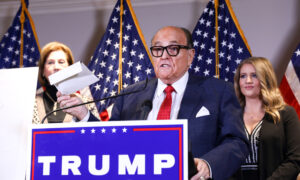 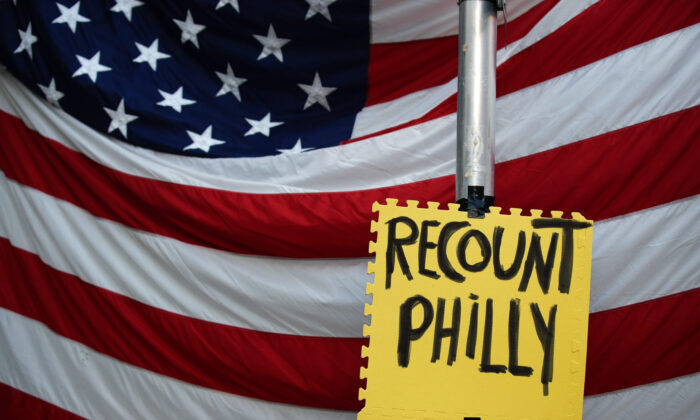 A sign hangs in front of an American flag, as supporters of President Donald Trump protest outside the Pennsylvania Convention Center, in Philadelphia, Pa., on Nov. 10, 2020. (Rebecca Blackwell/AP Photo)
US News

Law firm Kirkland & Ellis is withdrawing from representing Pennsylvania Secretary of State Kathy Boockvar in a lawsuit brought forward by the Trump campaign, with Kramer Levin attorney Barry Berke looking to step in as a substitute.

Kirkland & Ellis attorneys made the request in a notice of substitution of counsel filed on Nov. 20 (pdf), noting that Boockvar would be represented by Kramer Levin, Myers Brier & Kelly, and the Pennsylvania Office of Attorney General, until the end of legal proceedings.

This isn’t the first time Berke is to confront President Donald Trump’s legal team, with the National Law Journal reporting that Berke served as special counsel to the House Judiciary Committee as it built its impeachment case against Trump.

The move to switch legal representation comes after Linda Kerns, a lawyer leading the Trump campaign’s efforts to dispute the election results in Pennsylvania, complained to a federal court that she received an abusive voicemail from a Kirkland & Ellis attorney, with Kerns saying the message “by any measure falls afoul of standards of professional conduct.”

In a response, Kirkland lawyer Daniel Donovan said he thought the call was “discourteous and not appropriate” but disagreed with how Kerns had described it.

He said the company associate was “acting unilaterally, in his personal capacity, without the knowledge or authorization of undersigned counsel or the firm.”

Kerns has been placed under official protection after allegedly being subjected to various forms of harassment, with a Nov. 18 filing (pdf) saying she was “the subject of threats of harm, to the point at which the involvement of police and U.S. Marshals has been necessary to provide for her safety.”

She wrote on Nov. 16 that she had “been subjected to continuous harassment in the form of abusive emails, phone calls, physical and economic threats, and even accusations of treason—all for representing the President of the United States’ campaign in this litigation.”

Kerns later sought permission to quit working on the case, and Judge Matthew Brann allowed her to be “withdrawn as counsel” for the Trump campaign, according to a court filing.

There have been reports of harassment targeting lawyers representing Trump in election-related legal challenges.

The Trump campaign and Republican allies have filed several lawsuits in Pennsylvania, including challenging a deadline extension that allowed mail-in ballots received up to three days after Election Day to be counted, another alleging poll observers were kept too far away from vote counters and that Democratic-majority counties received preferential treatment, and another challenging Boockvar’s deadline extension for absentee voters to provide missing proof of identification.