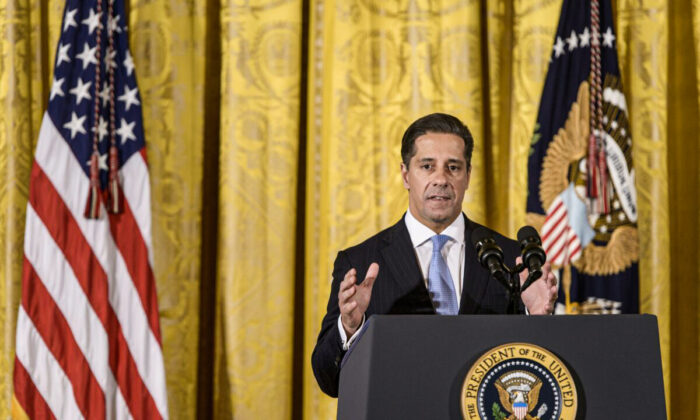 Alberto M. Carvalho, Superintendent of Miami-Dade County Public Schools, speaks at the ConnectED conference in the East Room of the White House, on Nov. 19, 2014. (Brendan Smialowski/AFP via Getty Images)
By Micaela Ricaforte

The Board, who initially set Carvalho’s first day for March 1, voted Feb. 8 to hasten his start by two weeks.

“We are all very excited to welcome Superintendent Carvalho to the Los Angeles Unified School District next week,” the Board said in a statement.

Carvalho, who has served as superintendent for Florida’s Miami-Dade County Public Schools for the past 13 years, outlined his plan for his first 100 days in office on Feb. 10 as he accepted an award for his leadership from The National Education Equity Lab—an organization that brings college-level courses to high school students in “underserved communities.”

One of Carvalho’s goals is to bring free college-level courses, such as the ones offered by The National Equity Lab, to the LAUSD, which he said will lead “to savings to the parents in the millions of dollars through the college credits that are earned while in high school.”

For schools in underserved areas, Carvalho will also focus on decreasing class size, providing all students with technology, and expanding school choice, particularly in communities that don’t currently have alternative options with students.

This comes as the board voted on Feb. 8 to apply for six new state-issued school codes for “alternative” online programs.

Carvalho also emphasized the importance of investing in early education.

“If we want to boost graduation rates, start investing in early-childhood education programs to minimize that gap that many students come into schools with as a result of all the factors that we recognize impact their ability to learn or their readiness for elementary education,” Carvalho said.

About 81.6 percent of four-year cohort students graduated during the 2020–21 school year, according to an LAUSD spokesperson.

As far as short-term goals, Carvalho said he will address student learning gaps caused by the COVID-19 pandemic.

“The level of academic regression [and] unfinished learning that has piled up is impressive and devastating to the lives of a lot of students across the country, certainly in Miami, and in Los Angeles,” Carvalho said.

Only 48.2 percent of kindergarten students met the state’s early literacy benchmarks in the 2020–21 school year—a 5.1 percent drop from the previous school year, according to a LAUSD spokesperson.

Carvalho signed a four-year contract and will be paid $440,000 a year.

Carvalho spent his last day as Miami-Dade superintendent at Miami Jackson Senior High, where he started his education career as a science teacher.