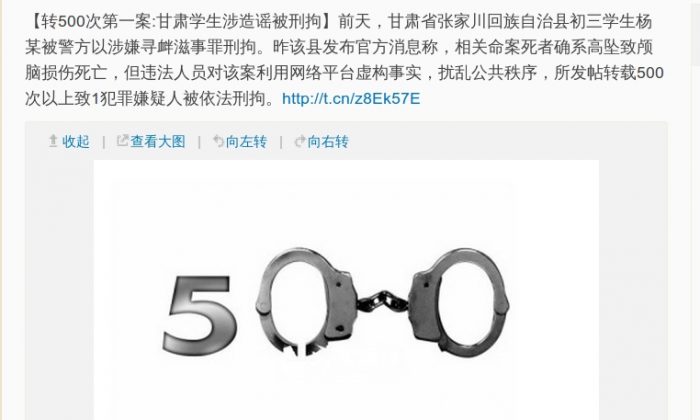 A post on Weibo notes the case of a middle-school student from Gansu Province who was detained by police after posting online what police said was a rumor, which was retweeted over 500 times. The current post has been retweeted 99 times. (Screenshot/Weibo.com/Epoch Times)
China

Two weeks ago the Chinese authorities unveiled a controversial new judicial interpretation that would allow them to punish anyone who exceeds a certain quota of views, or retweets, after posting rumorous content on the Internet. Now, they have taken their first scalp: a middle-school student.

The boy from the northwestern province of Gansu, identified only by the surname of Yang, was arrested by police after he posted online a message critical of local police, which was retweeted by other users.

At least one of the posts was forwarded over 500 times netizens. That was sufficient for police to take Yang into criminal detention on suspicion of “picking quarrels and provoking disputes,” police said. The news was first reported in the Chinese newspaper Jinghua Times. The reporter said that the posts in question on Yang’s microblog account had already been deleted.

Local officials had announced that the death was due to a head injury after a high fall, and that Yang’s remarks online were “fabricated facts” that “disturbed public order.” Another five people were also reportedly fined for disturbing public order, after they attempted to prevent the police from removing the body in Zhangjiachuan county.

Middle-school student Yang is the latest and so far one of the more modest targets of the Chinese Communist Party’s crackdown on speech on the Internet. Other figures that have been taken down, often in spectacularly public fashion, include Charles Xue, a venture capitalist who was made to confess on national television to visiting prostitutes, and the netizen “Boss Hua,” who had tracked down a corrupt official last year.

It is unclear what is in store for Yang. The Supreme People’s Court and the Supreme People’s Procuratorate said in their judicial interpretation on Sept. 9 that those who spread rumors could be sent to prison for up to three years.

Netizens were incredulous and furious at the news of Yang’s arrest. A sampling of online commentary follows.

“Daoshiyinji” said: “If the Party treated food safety as seriously as this, it would be wonderful.”

“Weixiaoxiangnuan5238530” wrote: “How could that be making rumors!!! Can’t common people have their own opinions to criminal cases?”

“Tianqibucuo20110929” said: “1.3 billion Chinese people have different opinions. Are you going to arrest them all?”

“Li Wenbo” remarked: “Who’s to judge if something is a rumor or not? Which institution dares to say its judgement is correct? What if it’s wrong? How can we guarantee the freedom of speech written in the constitution?”

Lawyer Han Baoru said: “The provisions for juvenile crime are useless. He’s a 16 year old child. Why can’t his family get bail for him? Why does he have to be put under criminal detention? I question why he is not treated separately from adult offenders!”