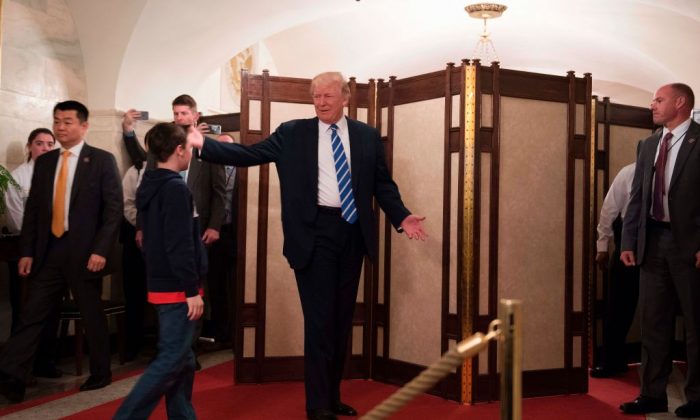 US President Donald Trump (C) gestures to 10-year-old Jack Cornish of Birmingham, AL, as he surprises visitors during the official reopening of public tours at the White House in Washington, DC, March 7, 2017. (JIM WATSON/AFP/Getty Images)
US

Latest Poll a Warning for Democrats

Amid a sea of conflicting and confusing polls about President Donald Trump’s favorability rating, there’s a recent one that stands out, and it may serve as a wake-up call for the Democratic leadership.

While Trump has been described by some media outlets’ polls as “unpopular,” the Democratic Party is doing even worse, according to a poll from Suffolk University.

A USA Today/Suffolk University poll, conducted in the first week of March, found that Trump’s approval is 47 percent and the Democrats’ approval rating is 36 percent. Hillary Clinton netted a 35 percent approval rating in the same poll.

The poll also found that 59 percent of voters feel Trump tweets too much and 60 percent don’t approve of his temperament.

A Rasmussen Reports poll, released in late February, found that only 29 percent of respondents approve of the Democrats’ current strategy of opposing the president in every way possible. And 63 percent believe that Democrats should try to work with Trump instead.

It’s no secret that the Democrats are basically in shambles. Trump’s win was the icing on the cake for Republicans, who netted more than 1,000 seats at the state and federal level after Obama took office in 2009.

What the Media Doesn’t ‘Get’ About Trump Supporters

Another case in point is House Minority Leader Nancy Pelosi’s favorability rating. In the most recent NBC/Wall Street Journal (which has a +5-percent Democrat sample), Pelosi is the least-liked politician in the United States. Only 19 percent of Americans view her positively, and 44 percent have a negative opinion of the longtime San Francisco, California, representative.

In 2018, with looming gubernatorial, House, and Senate races, that figure may only grow if the Democrats continue on their path against Trump.

Regarding Trump, differing polls show inconsistencies in his approval/disapproval ratings during his first 50 days in office—similar to polls when he was running against Clinton last year. While a certain portion of Americans will inevitably disapprove of him, it could be useful for him to keep an eye on polls comparing his favorability ratings with the Democrats.

Judging from the polls, Trump can only hope the Democrats continue to oppose his mandate. For Democrats, they might want to rethink their current strategy.