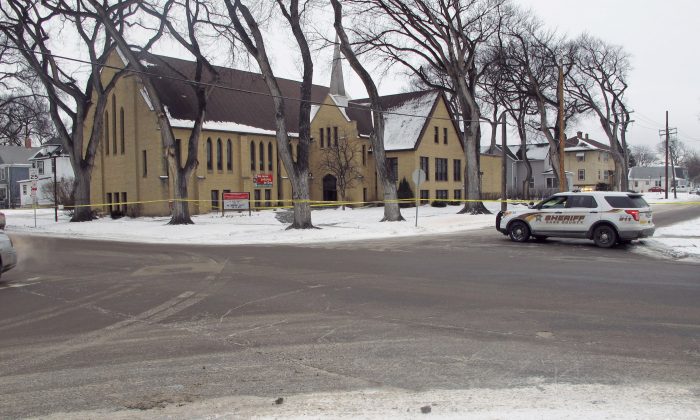 Authorities block off an area in front of Plymouth Congregational Church and near a house in north Fargo, N.D., Thursday, Feb. 11, 2016, where a suspect fired at police officers during an 11-hour standoff that left a Fargo police officer near death. Police chief Dave Todd says that Officer Jason Moszer will not survive his wounds. The suspect, who has not been identified was found dead from a shotgun wound. (AP Photo/Dave Kolpack)
Crime and Incidents

FARGO, N.D.—The latest on a standoff in Fargo, North Dakota, that has left a police officer with life-threatening injuries (all times local):

Police say a suspect in the shooting of a North Dakota police officer has been found shot to death in the home where he barricaded himself for about 11 hours. The injured officer, Jason Moszer, is not expected to survive.

Police Chief David Todd says a SWAT team entered the Fargo home shortly before dawn Thursday and found the man’s body. Todd says he doesn’t know if the suspect was hit in an earlier exchange of gunfire with a SWAT officer or if he shot himself.

Police have not released the suspect’s name.

The standoff began Wednesday evening following a domestic violence report. Police said the suspect fired multiple rounds from inside the home, seriously injuring Moszer. Todd says Moszer is in a hospital and that his family is “saying goodbye to him.”

Police say a standoff at a Fargo home that left a police officer mortally wounded has ended.

Fargo Police Chief David Todd said in a news release early Thursday that the situation has been resolved and that neighbors need no longer shelter in place.

Police didn’t immediately give an update on the man who has barricaded himself inside the home since Wednesday evening. Todd said earlier that the man might have been shot in an exchange of gunfire with a SWAT officer.

The standoff began following a domestic violence report. Police said the standoff suspect fired multiple rounds and Officer Jason Moszer was injured. Todd says Moszer is in a hospital and that his family is “saying goodbye to him.”

Police do not believe anyone else has been injured.

Police say a man suspected of shooting a Fargo police officer who is not expected to survive might also have suffered a gunshot wound during the ongoing standoff.

Police Chief David Todd said early Thursday that the suspect has exchanged gunfire with a SWAT officer and authorities are not sure of his status. The standoff is continuing and area residents have been told to stay indoors.

The man’s son called dispatchers Wednesday night and said the suspect had fired a gun at his wife. The caller and his mother were able to escape the home unharmed.

Thirty-three-year-old Officer Jason Moszer responded to the scene and was shot. An emotional Todd said Moszer is in a hospital and that his family is there “saying goodbye to him.”

Police do not believe anyone in nearby houses has been injured

Police in North Dakota say an officer has been shot amid a standoff with a domestic violence suspect in Fargoand is not expected to survive.

Anderson says the suspect fired multiple rounds from inside the home and struck Moszer. A SWAT team took Moszer to a medical facility, where his family was with him.

Anderson says the six-year veteran of the force is “not expected to survive.”

Authorities have checked on nearby residents and don’t believe anyone else is injured.

The incident began around 7 p.m. after a report that the suspect had fired a gun at his family.

The standoff is ongoing. Anderson says authorities haven’t made contact with the suspect.

Authorities say a suspect in a domestic dispute is barricaded inside a home in north Fargo and has been firing shots amid a standoff with officers.

Fargo Deputy Police Chief Joe Anderson says the incident began around 7 p.m. when a caller told dispatchers his father had possibly fired a gun at his mother.

Anderson says the caller and the suspect’s wife were able to leave the home unharmed. The suspect then began to fire multiple rounds out of the house.

A SWAT team was activated. Nearby residents were asked to stay inside.

Anderson said just before 2 a.m. the standoff was ongoing and officials are considering using robots to attempt to contact the suspect.