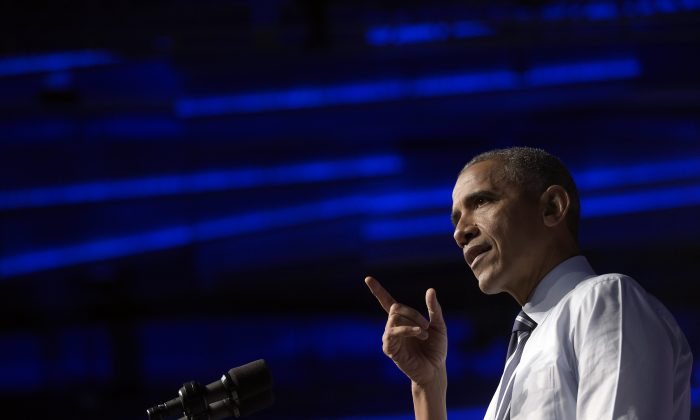 President Barack Obama at a campaign event for the Ohio Democratic Party and for the Senate bid for former Ohio Gov. Ted Strickland at the Greater Columbus Convention Center in Columbus, OH., on Oct. 13, 2016. (AP Photo/Susan Walsh)
US

WASHINGTON— The Latest on the U.S. presidential race (all times EDT):

President Barack Obama says Hillary Clinton made an “honest mistake” by using private email that is now “being blown up into just some crazy thing.”

Obama is offering his first public comments on revelations the FBI is looking into more emails. Obama said in an interview posted Wednesday with the online news outlet NowThis that he’s trying to avoid looking like he’s meddling in an independent process.

Obama says new voters hear “all that noise” and wonder whether they should be worried about Clinton’s behavior. But he says he has absolute confidence in her.

A super PAC backing Hillary Clinton is following her campaign’s lead onto the airwaves of Michigan and Colorado.

Priorities USA will spend at least $1 million in each of those states on TV ads by Election Day. Clinton’s campaign has already announced plans to advertise in both states.

Clinton is favored in Michigan and Colorado, but they have been targeted by Republican Donald Trump’s campaign.

The super PAC raised $175 million over the past two years and has been second only to the Clinton campaign as a top presidential ad buyer.

Super PACs can raise and spend unlimited amounts of money in support of a candidate, but they can’t coordinate with the candidate’s campaign.

President Barack Obama is warning that early voting among African-Americans is lagging this year and threatens Hillary Clinton’s prospects.

Obama told the “Tom Joyner Morning Show” that early voting is up among Hispanics, but not among black voters.

The president said people who care about his presidency must understand that all his accomplishments are based on his being able to “pass the baton” to a likeminded successor.

The interview was recorded Tuesday and aired Wednesday.

Hillary Clinton is pressing into reliably red Arizona Wednesday as she tries to steal a Republican state away from Donald Trump.

FBI Review of Newly Discovered Emails Could Drag Beyond Election

Her rival, reinvigorated by the FBI’s new email review, was laser-focused on Florida, a marquee battleground state he can’t win the White House without.

With less than a week until Election Day, both candidates are warning of dire consequences if the other is elected.

Trump says Clinton would be under investigation as president, sparking a “constitutional crisis,” though the FBI has declined to prosecute her for her handling of classified information. Clinton has vowed the FBI will have “no case” after reviewing new emails, but her campaign is nervous about tightening polls and is ramping up attacks on Trump.