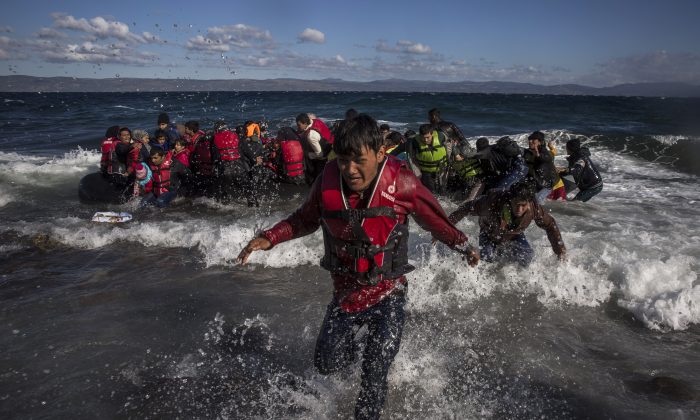 Afghan migrants disembark safely from their frail boat in bad weather on the Greek island of Lesbos after crossing the Aegean see from Turkey, Wednesday, Oct. 28, 2015. (AP Photo/Santi Palacios)
Europe

LESBOS, Greece— Drowned babies and toddlers washed onto Greece’s famed Aegean Sea beaches, and a grim-faced diver pulled a drowned mother and child from a half-sunk boat that was decrepit long before it sailed. On shore, bereaved women wailed and stunned-looking fathers cradled their children.

At least 27 people, more than half of them children, died in waters off Greece Friday trying to fulfill their dream of a better life in Europe. The tragedy came two days after a boat crammed with 300 people sank off Lesbos in one of the worst accidents of its kind, leaving 29 dead.

It won’t be the last.

As autumn storms threaten to make the crossing from Turkey even riskier and conditions in Middle Eastern refugee camps deteriorate, ever more refugees — mostly Syrians, Afghans and Iraqis — are joining the rush to reach Europe.

More than 60 people, half of them children, have died in the past three days alone, compared with just over a hundred a few weeks earlier.

Highlighting political friction in the 28-nation European Union, Greece’s left-wing prime minister, Alexis Tsipras, cited the horror of the new drownings to accuse the block of ineptitude and hypocrisy in handling the crisis.

Hungary’s right-wing foreign minister, Peter Szijjarto, used the same word — hypocrisy — about critics of his country’s fencing off its southern border to keep migrants out.

Szijjarto described the influx as the biggest challenge the EU has ever faced. While that may be an over-statement, the crisis has pitted countries like Greece, with well over 500,000 arrivals so far, against eastern Europeans who are unwilling to take in refugees — or, like Hungary, insist that anyone leaving a relatively safe country, such as Turkey or Greece, for a wealthy one like Germany is by definition an economic migrant.

Speaking in Athens, Tsipras accused Europe of an “inability to defend its (humanitarian) values” by providing a safe alternative to the sea journeys.

“The waves of the Aegean are not just washing up dead refugees, dead children, but (also) the very civilization of Europe,” he said, dismissing Western shock at the children’s deaths as “crocodile tears.”

“What about the tens of thousands of living children, who are cramming the roads of migration?” he said. “I feel ashamed of Europe’s inability to effectively address this human drama, and of the level of debate … where everyone tries to shift responsibility to someone else.”

Tsipras’ government has appealed for more assistance from its EU partners. It argues that those trying to reach Europe should be registered in camps in Turkey, then flown directly to host countries under the EU’s relocation program, to spare them the sea voyage. But it has resisted calls to demolish its own border fence with Turkey, which would also obviate the need to pay smugglers for a trip in a leaky boat.

“My opinion is that at this stage — for purely practical reasons — … the opening of the border fence is not possible,” Greek Migration Minister Yiannis Mouzalas said.

“When talking about receiving refugees, it’s not under our control — they are coming,” he told state ERT TV. “So it’s a question of how we address this problem. … We will not put them in jail or try to drown them. They will have all the rights that they are allowed under (international) agreements and Greek law.”

Greece’s Merchant Marine Ministry said 19 people died and 138 were rescued near the eastern island of Kalymnos early Friday, when a battered wooden pleasure boat capsized. Eleven of the victims were children, including three babies.

At least three more people — a woman, a child and a baby — died when another boat sank off the nearby island of Rhodes, while an adult drowned off Lesbos.

On the Turkish side, four children drowned and two were missing after two new accidents Friday involving boats en route to the Greek islands of Lesbos and Samos, Turkey’s state-run news agency said.

Nearly 600 people were rescued by the Greek coast guard in the past 24 hours, while thousands more made it safely from Turkey to Greece’s eastern islands.

Far to the west in Spain, rescuers found the bodies of four people and were searching for 35 missing from a boat that ran into trouble trying to reach Spain from Morocco.

Jean-Christophe Dumont, head of the migration division at the Paris-based Organization for Economic Cooperation and Development, said more than a million people are expected to reach Europe this year.

“For next year I think it’s clear the migration pressure will remain,” he said. “It’s not a tap that you can turn on and off. Even if the flow would stop, it would actually not stop, because you will see family reunification — the aftermath of the flow of refugees.”

The influx has overwhelmed authorities in financially struggling Greece. The country is the main point of entry for people fleeing war and poverty in the Middle East and Africa, after an alternative sea route from Libya to Italy became too dangerous.

Most go to Lesbos, a normally quiet island known as the olive-producing birthplace of the ancient poet Sappho. As residents grappled with Wednesday’s latest tragedy, thousands of new arrivals crowded into the main town of Mytilene and makeshift camps nearby, crowding around stalls selling canned food, backpacks, blankets and other basics for their long trek across Europe.

Many slept rough on the waterfront lined with yachts, rescue vessels and the remains of broken up dinghies.

At one of the largest camps, muddy roads were strewn with garbage — shoes, plastic bags, underpants, shreds of clothing — as thousands camped on a hillside. Local residents used vans to sell tents, toiletries, and sandwiches, as camp dwellers hung laundry on olive trees, taking advantage of a break in the rain.

Mustafa Hosab sat with four cousins eating a kebab on the waterfront.

“We’re from Idlib, in northern Syria, near Turkey. We left because the fighting was changing all the time and it’s not safe,” he said. “We’ll go wherever we can, maybe Germany or Sweden. We came from Turkey, and the boat was OK. We were lucky.”