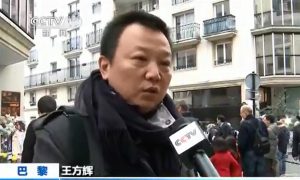 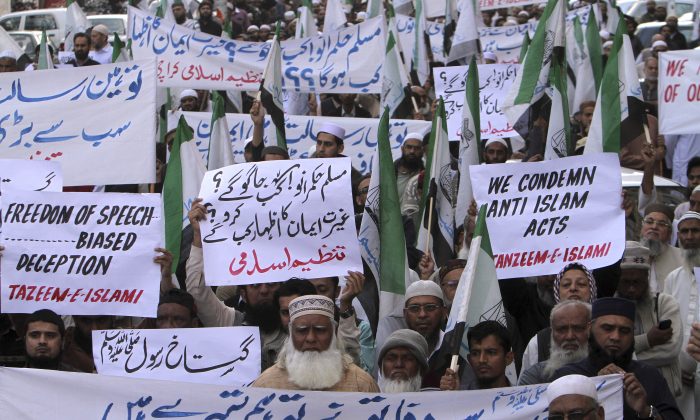 Supporters of a Pakistani religious party 'Tanzeem-e-Islami hold a demonstration to protest against caricatures published in French magazine Charlie Hebdo, in Karachi, Pakistan, Saturday, Jan. 17, 2015. Hundreds of supporter of religious groups demonstrated in Pakistani port city against the satirical newspaper and its publication of cartoons depicting the Prophet Muhammad. (AP Photo/Fareed Khan)
International

CAIRO—The French weekly Charlie Hebdo has continued to draw a somewhat contradictory reaction across the Muslim world. Many Muslims have expressed disgust at the deadly assault on the magazine’s Paris office by Islamic extremists who killed 12 people. However many also remain deeply offended by the magazine’s record of publishing cartoons lampooning the Prophet Muhammad. Those passions were further inflamed this week when the magazine’s first issue following the attack carried acover cartoon depicting Muhammad holding a “Je Suis Charlie” sign.

According to mainstream Islamic tradition, any physical depiction of the Prophet Muhammad — even a respectful one — is considered blasphemous.

Iranian judicial authorities on Saturday banned a daily newspaper for publishing a front-page headline that allegedly indicated support for Charlie Hebdo. Mohammad Ghoochani, chief editor of the daily Mardom-e-Emrooz, or Today’s People, told the semi-official Tasnim news agency that his paper had been ordered closed. The paper’s Tuesday edition featured a front-page article with a headline that quoted filmmaker and activist George Clooney as saying “I am Charlie Hebdo.” However the accompanying article did not actually express support for Clooney’s statement, nor for the magazine itself.

The Iranian government has publicly condemned both the attack on Charlie Hebdo and the magazine itself, calling the continued publishing of Muhammad caricatures “provocative” and an insult to Islam.

“Freedom of expression should be used in a way to boost understanding between the religions,” he said in a statement issued by the presidential palace. “Afghanistan has suffered many years of war and violence, more than any other country, and it is necessary to understand and promote peaceful coexistence among all the people of the world.”

Al-Abadi called on all parties to “desist such practices that create an atmosphere of division and rejection.” He also reiterated his condemnation of the attacks on innocent victims in Paris, saying that terrorism, “has nothing to do with Islam in any way.”

Protesters also demonstrated in front of the French Embassy in the Yemeni capital of Sanaa, as well as in the Pakistani city of Karachi. In Egypt, the Islamist Noor Party denounced the latest Charlie Hebdo coveron its French-language Facebook page. “Just as the Noor Party rejects the assault on civilians and the negative effects it has for all Muslims of Europe, it also rejects this barbaric, irresponsible act under the name of freedom of expression,” the statement declared.

In Gaza City, the capital of the Gaza Strip, unknown vandals scrawled graffiti on the walls of the French Cultural Center. In addition to statements praising the Prophet Muhammad and declaring him off-limits for ridicule or satire, the vandals also wrote: “To hell, to a miserable destiny, French journalists.”

From The Associated Press. AP writers Ali Akbar Dareini in Tehran, Iran, Lynne O’Donnell in Kabul, Afghanistan and Vivian Salama in Baghdad contributed to this report.