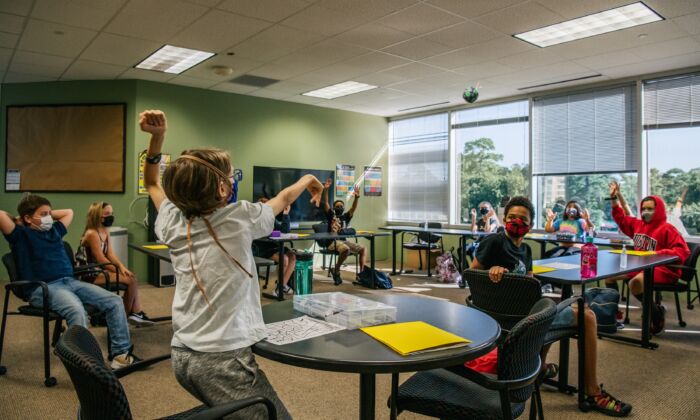 Children are seen wearing masks in compliance with a mask mandate in an activity in class at the Xavier Academy in Houston, Texas, on Aug. 23, 2021. (Brandon Bell/Getty Images)
Regional News

The latest Republican-led bid to end mandatory masking of Pennsylvania school children failed Thursday in Harrisburg in a 4–7 vote by the little-known Joint Committee on Documents.

In August, Gov. Tom Wolf, a Democrat, asked the General Assembly to approve a mandate requiring all schools and childcare centers to make children wear masks to prevent the transmission of COVID-19. The Republican-led General Assembly leadership refused.

During a Sept. 14 House Health Committee meeting, Republican Majority Chair Kathy Rapp said it was as if Beam made her own law, and that Beam did not have the authority to impose a masking order outside an emergency declaration. And if the mask mandate is considered a regulation, it had not yet gone through the regulation approval process.

The House Health Committee agreed to send a letter to the Commonwealth Joint Committee on Documents asking it to determine if Beam’s order should go through the lengthy promulgation process to become a regulation, or if the Department of Health should cease and desist enforcing the order.

The Committee on Documents announced Thursday that it determined the masking order should be promulgated as a regulation.

Vincent DeLiberato of the Legislative Reference Bureau chaired the committee, and said during the meeting the mask mandate may stay in place while the Department of Health goes through the regulatory approval process.

“I cannot stand for the proposition that we could shut the department down—that this committee has the authority to shut down an emergency order today,” DeLiberato said.

Following the vote to sustain the masking order, Speaker of the House Bryan Cutler, a Republican who sits on the Committee on Documents, issued a statement saying the measure is not about masks on children, but instead it is about whether each branch of state government, and the officials working in those branches, will follow the law and respect the state Constitution.

“No unelected government bureaucrat should ever have the sole and unilateral authority to issue open-ended ‘orders’—whether they focus on public health response or something else. To give such limitless discretion would elevate the acting secretary’s power above at least two branches of our tripartite government,” Cutler said in the statement.

“Unfortunately, this School Masking Order is a symptom of a larger constitutional disease that I warned of when the current legislative session began. The continued disobedience to the Constitution’s fragile but necessary divisions of responsibility and authority threaten the legitimacy of actions taken by our government and invite the further erosion of our system of government that depends on respecting those specifically assigned duties.”

“The General Assembly has had to contend with issue after issue that has been advanced in the administrative state by the executive departments or dictated by the courts,” Cutler said, and then offered some examples, including what he called Wolf’s unilateral decision to expand Medicaid in 2015, the decertification of election machines prior to the 2020 election, the issuance of an expansive overtime rule that was opposed by the General Assembly, and the continued efforts to join the Regional Greenhouse Gas Initiative without legislative approval.

“In a representative democracy, the protection for all people is in our processes,” Cutler said. “Those processes may seem lengthy and full of legislative and regulatory roadblocks, but that is by design, so that no one person, authority, or interest can outweigh the voices of the people. Therefore, any time steps in our processes are ignored for any reason, we are eroding the very fabric that holds our democracy together.