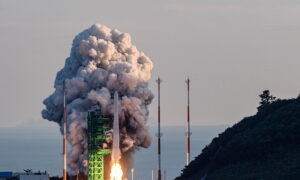 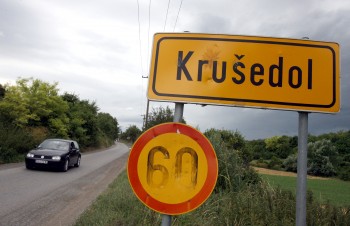 Suspect located: Goran Hadzic, the last fugitive wanted by the UN war crimes court in The Hague, was arrested today in a forest near the village of Krusedol at the Fruska Gora mountain north of capital Belgrade. (STR/AFP/Getty Images)
World

Goran Hadzic, the last remaining fugitive wanted for war crimes by the International Criminal Court for Former Yugoslavia, was arrested Wednesday in the mountains near Belgrad.

Serbian authorities apprehended Hadzic and he is expected to be extradited to The Hague, the seat of the ICTY, within days, according to a press briefing at the court.

Hadzic, former president of the self-proclaimed, breakaway Republic of Serbian Kraijina, is suspected of having committed crimes against humanity as well as war crimes in eastern Croatia between 1991 and 1992 during the Balkan wars.

The 52-year-old Serbian is charged with taking part in the persecution ”as co-perpetrator” with Croat and other non-Serb civilians in order to create a Serb-dominated state in the Republic of Croatia.

The campaign included murder, torture, destruction of villages, and plunder. His indictment mentions the massacre of 250 people in the town of Vukovar, one of the first atrocities of the wars.

Judge O-Gon Kwon, acting president of the ICTY, called the arrest a “milestone in the Tribunal’s history,” according to an ICTY press release.

After being on the run for seven years, Hadzic was found by the police in the Fruska Gora mountain, near the Krusedol village, some 50 miles north of Belgrad, according to the Croatian newspaper Slobododna Dalmacija. He is believed to have been hiding in a nearby monastery.

European leaders have called Serbia’s cooperation with the court as one the last hurdles to move forward with Serbian membership application. It is expected that Serbia will now be able to obtain official candidate status for inclusion in the EU by the end of the year.

The ICTY was established 18 years ago by the United Nations Security Council in order to deal with the war crimes committed during the conflicts in the Balkans in the 1990s. It is the first international criminal court created since the post-WWII courts of Nuremberg and Tokyo.

“We can now say that no indicted person has successfully evaded the Tribunal’s judicial process. This is a precedent of enduring significance, not only for this Tribunal, but also for international criminal justice more generally,” ICTY Persecutor Serge Brammertz said in a press briefing.

So far, more than 60 individuals have been convicted by the court and over 40 others are still in process.

The ICTY’s mandate is only to bring to justice the worst perpetrators. Brammertz pointed out at the briefing, the “Tribunal is part of a much broader process for establishing accountability for atrocities committed during the wars in the former Yugoslavia. The victims of thousands of other crimes are still waiting for justice.”