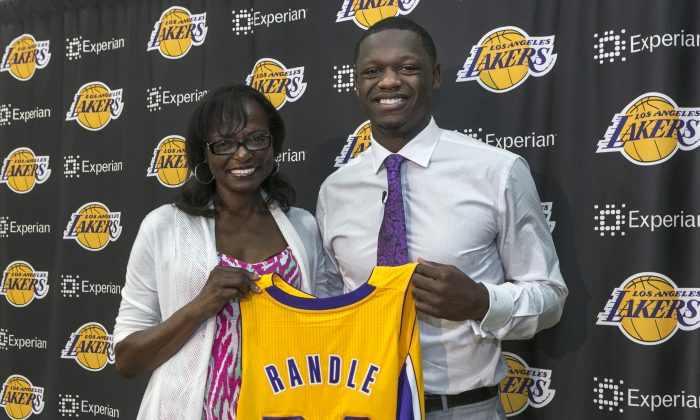 Los Angeles Lakers forward Julius Randle poses with his mother, Carolyn Voyles, in this file photo. Randle and Jeremy Lin may not start for the Lakers in the upcoming 2014-15 season. (AP Images)
NBA

The Los Angeles Lakers news and rumors keep coming this offseason as the team gets ready for training camp.

“That’s how I look at it right now,” Scott said. “But when the ball is thrown up September 30th, if the next guy can beat the guy in front of them, so be it.”

Scott plans to work his players extremely hard and the lineup could change before the start of the season.

The conditioning will be so intense that Scott is going to place four trash cans in each corner of the court.

“I don’t want guys throwing up on my floor,” Scott said.

Nash starting over Lin would likely be the biggest surprise, as more people believed that Boozer could start over Randle. Nick Young will likely be the sixth man, with Randle the first big man off the bench.

“The first day is going to be tough,” Scott said “I want to see which guys are ready and prepared, who’s in shape and who’s not. I’ll find out on the first day.”

Lin Getting Ready for Camp

Lin is not going to stay on the bench without a fight, and shared with his Instagram followers that he’s preparing for training camp.

The picture shows him practicing his 3-point shot in a gym with the help of a trainer.

Henry May Not be Ready

Xavier Henry, once considered a contender for the starting small forward spot, may not be ready for training camp.

Scott told the LA Daily News forward Xavier Henry “might be limited in training camp” because of a surgically repaired left wrist and right knee that have not fully healed.

“I haven’t seen him do much on the court,” Scott said. “It’s going to be close on if he’s ready for camp.”

The Lakers confirmed Henry has not fully recovered from his injuries, but didn’t provide immediate details on his progress.

Scott still expects Henry will be healthy for the start of the season.

Bryant to Get Rest

Young, Johnson, Lin, and Henry are among the players who will see more minutes due to Scott emphasizing rest for Kobe.

Scott told the LA Daily News in the same interview that Bryant will sit out select practices and possibly back-to-back games.

“I know how stubborn he is and he knows how stubborn I am,” Scott said. “There’s going to be times we’re butting heads. But it’s all because we want to win.”

Scott said he will likely follow the same approach with 40-year-old Nash, who sat out last season on the second night of back-to-backs when healthy.