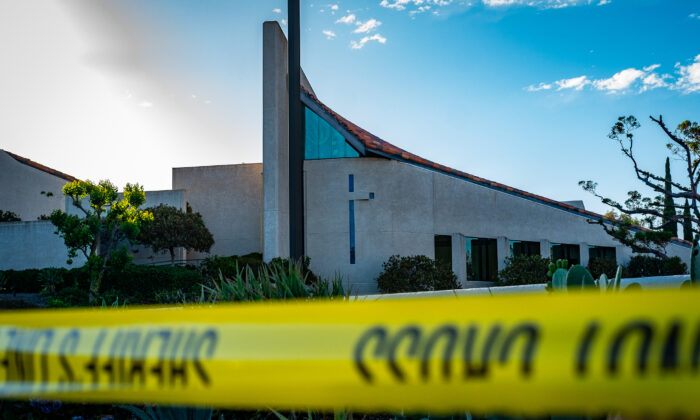 LAGUNA WOODS, Calif.—The suspected gunman in a deadly attack at a Southern California church on May 15 was “politically motivated” by political tensions between China and Taiwan, officials say.

The shooting, which left one person dead and five others injured, occurred at around 1:25 p.m. at Geneva Presbyterian Church—following a Taiwanese service.

The suspect, identified as 68-year-old David Chou of Las Vegas—a Chinese immigrant and U.S. citizen—drove to the church the night before the attack, Orange County District Attorney Todd Spitzer told The Epoch Times. Chou was booked at the Orange County Jail on one felony count of murder and five felony counts of attempted murder, according to the county’s sheriff’s department.

“There’s a lot of evidence that absolutely at this point in time indicates that the suspect had an absolute bias against the Taiwanese people, its country,” Spitzer said during a May 16 press conference.

Members of the Taiwanese Presbyterian Church were enjoying lunch following their 11:30 a.m. Sunday service when Chou opened fire. Prior to the attack, Chou had super glued and chained the exits of the church. Molotov cocktails and magazines of ammunition were found by police behind a curtain in the banquet hall.

Six people were hit, with one male killed, four are in stable condition, and one is in unknown condition as of May 16. The wounded victims range in ages between 66 and 86, according to the sheriff’s department.

Spitzer recalled walking onto the crime scene after the shooting and seeing 10 empty lunch tables with abandoned canes, walkers, and red plastic cups.

John Cheng, a 52-year-old doctor and resident of Laguna Niguel, was fatally shot by Chou while attempting to disarm him. His actions allowed other parishioners to tackle the gunman and tie him with an extension cord while confiscating his two handguns—potentially sparing the lives of about 40 more people.

“Without the actions of Dr. Cheng, it is no doubt that there [would] have been numerous additional victims,” Orange County Sheriff Don Barnes said.

Cheng was pronounced dead at the scene, leaving behind his wife and two children, the sheriff’s office said.

A former pastor of the Taiwanese church where the shooting occurred—Billy Chang—sent a letter written in Chinese to the South Gate Presbyterian Church in Taiwan explaining the incident, as reported by the Taiwan Church News Network.

“I thought it was a toy gun at first,” he wrote, explaining that a group of people was taking photos on the stage when the shooting occurred.

“At that moment, I didn’t know to hide. But I could see that things were going very wrong.”

Chang explained how he jumped down from the stage while the shooter was pointing his gun down—possibly trying to reload—and quickly picked up a chair and threw it at the shooter.

The suspect then fell to the ground and was pinned by the pastor—before other parishioners helped tie him up.

“Only then did I see Doctor Cheng lying face-down to the right, with three bloody gunshot wounds on his back, not moving at all,” Chang said.

This article will be updated as events develop.