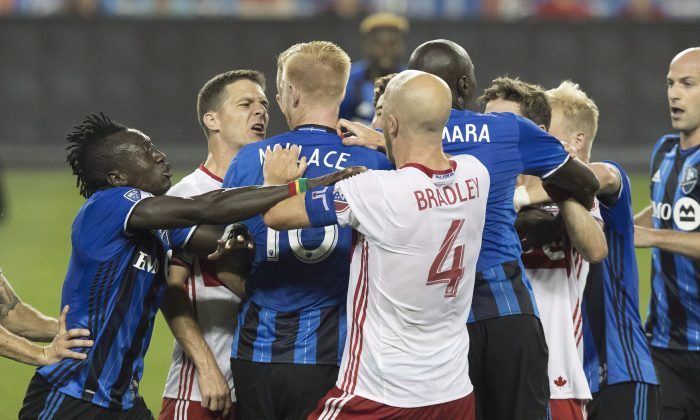 Toronto FC and Montreal Impact players push and shove in the first half at BMO Field in Toronto on Aug. 27, 2016. Montreal’s Callum Mallace was sent off for his actions that led to the skirmish. (The Canadian Press/Fred Thornhill)
Canadian Content

TORONTO—It used to be a lack of a proven goalscorer, then it was a porous defense.

But for all the things TFC have done right this season—and there have been many—their woeful record when playing a man up highlights the team’s biggest weakness.

TFC have not won a game in which they’ve ended it up a man—or two, in the case of July 16’s 2–1 loss in San Jose. The Reds have five losses and one draw in six such situations this year. Further, TFC has only scored one goal when up a man, and they’ve conceded two. San Jose actually scored on TFC playing 9 against 11.

We need to execute like a team that’s a championship team.
— Greg Vanney, Toronto FC

TFC are proving to have a hard time breaking down teams that sit back, defend, and play on the counter. And that’s exactly what the Montreal Impact did at BMO Field on Saturday, Aug. 27. Impact captain Ignacio Piatti scored with his team down to 10 men for a vital 1–0 win.

“The context is that it’s one game,” TFC head coach Greg Vanney said in his postgame press conference.

“I don’t think you can ride the highs and lows of each game over a long season and let them affect you either way,” he added. But he acknowledged TFC has to continue to build a killer mentality to take advantage of what should be winning situations.

“We need to execute like a team that’s a championship team,” Vanney said.

Toronto FC entered the game in first place in MLS’s Eastern Conference, winning six of its last seven games, and with just one loss in its last 11 games.

Montreal head coach Mauro Biello called the Impact’s first-ever win at BMO Field the biggest of the season. “They’re probably the best team in the league,” Biello said about TFC in his postgame press conference.

TFC is attracting attention for all the right reasons this year, but they still have a long way to go to be anything close to champions. The Reds are in the conversation for the Supporters’ Shield—for finishing atop MLS at the end of the regular season—and making the playoffs for only the second time in their 10-year history seems a foregone conclusion.

“We haven’t really accomplished anything yet. We want to be the best version of ourselves,” reminded Vanney a day before facing the Impact. A disappointing TFC loss to their archrivals speaks to Vanney’s point that TFC still need to improve.

The good thing is Vanney doesn’t think TFC were complacent. It was a cautious, tactical affair until Impact midfielder Callum Mallace was sent off for knocking TFC’s Steven Beitashour to the turf near the end of the first half.

TFC captain Michael Bradley spoke about what is different playing 11 versus 10.

“Spaces become tighter and all the little details, how you move, how you set things up the execution of the final pass—all that stuff becomes that much more important,” he said in the locker room after the game.

“We couldn’t make a final play in terms of the right timing, the right execution, the quality of the last pass,” Bradley said.

That lack of a killer instinct against a dogged and determined side is one of the few things TFC has to improve if it wants to go deep in the playoffs. In the home-and-away format with away goals the tiebreaker, Toronto FC could well face teams sitting back and defending in numbers.

“And obviously it all gets compounded when we let our guard down for two seconds on a goal kick and they punish us,” Bradley said.

It was as if Montreal got their away goal and just had to see the game out.

And if Montreal, who have struggled defensively this year, did it against TFC, it creates a blueprint and confidence for others to do so as well.

An attack can get predictable when facing 10 men. Bradley, at the base of TFC’s diamond midfield, had plenty of possession near the top of Montreal’s penalty area, but hardly ever shot at goal. The absence of a long-range threat made the Impact’s job easier.

“We’ve got to prove that we can hurt teams with a shot outside of the box,” Vanney said.

It’s a scenario seen over and over again in international football where an attacking team buzzes around the penalty area, but ultimately doesn’t create anything dangerous. Montreal defended comfortably and Biello said his players never thought they’d lose the game. Impact goalkeeper Evan Bush only had to make three saves and claimed just one cross.

TFC has seven games left—five of which are at home—and don’t play again until Sept. 10. Two of the games are against last place Chicago and the penultimate game is in Montreal, site of the Reds’ 2–0 win on Stade Saputo’s 2016 home opener.

Bradley said there are times when you want to get back out on the pitch and set things right, but Toronto is coming off a busy period.

“The break comes at a decent time in terms of being able to assess where we are going into this final stretch and be able to really finish in a strong way,” Bradley said.