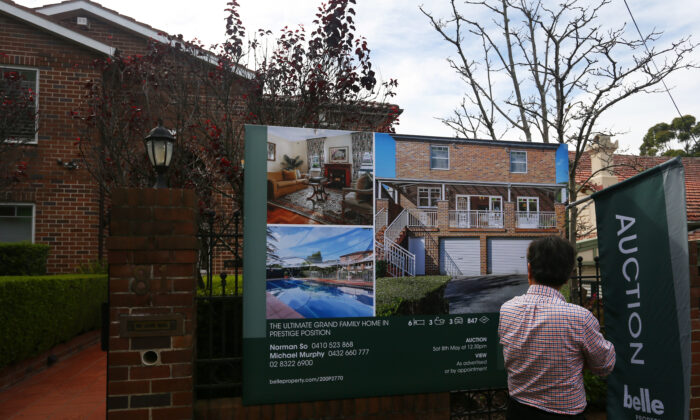 A prospective buyer attends an auction of a residential property in the suburb of Strathfield in Sydney, Australia, on May 8, 2021. (Lisa Maree Williams/Getty Images)
Australia

An impending interest rate rise and a new opposition shared equity plan to get thousands of people into homes has intensified the spotlight on property affordability.

Federal Labor says the cost of buying a home will be slashed by up to 40 percent for about 10,000 low to middle income earners a year if it wins government.

“Our policy is about ensuring that Australians get to own their own home, Labor’s policy is about the government owning parts of your home with you,” Birmingham told ABC’s Insiders on Sunday.

Labor’s Help to Buy scheme will provide an equity contribution of up to 40 percent of the purchase price of a new home, and up to 30 percent for an existing dwelling, with buyers needing a minimum deposit of two percent.

Ahead of the most recent federal budget, the government announced up to 50,000 places would be available each year under its scheme allowing first home buyers to enter the market with a much smaller deposit.

“It’s helping now really lift the rates of first time ownership … and importantly, you get your own your own home, you don’t have Albanese at the kitchen table,” Birmingham said.

Under Labor’s plan, Australians will be able to buy back an additional stake in the home, owned by the federal government, in five percent increments or pay the government back when they sell.

The scheme is not exclusive to first home buyers but participants must be Australian citizens and live in the home for two years.

The Reserve Bank will meet on Tuesday to discuss the prospect of a mid-campaign interest rate rise.