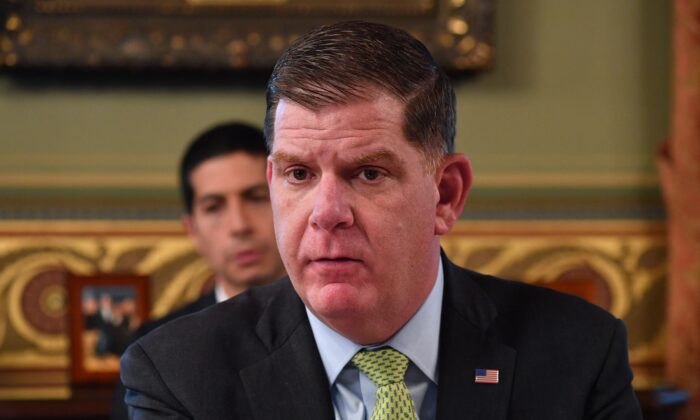 Secretary of Labor Marty Walsh is seen in Washington on May 13, 2021. (Nicholas Kamm/AFP via Getty Images)
Executive Branch

Labor Secretary Marty Walsh, during a media blitz on Thursday, said that the new Biden administration rule that requires private employees to show proof of COVID-19 vaccination or get tested for COVID-19 on a regular basis is not a mandate.

“This isn’t a mandate—this is a vaccine or testing,” Walsh, a former mayor of Boston, said during an appearance on MSNBC.

The Labor Department’s Occupational Safety and Health Administration (OSHA) promulgated earlier in the day what’s known as the emergency temporary standard that outlines the requirements for private employers.

The requirement mandates businesses with 100 or more workers to either obtain proof of COVID-19 vaccination from each employee or results from COVID-19 testing done on a regular basis, at least once a week. It may be expanded to smaller businesses before being finalized.

Critics said the standard is clearly a mandate.

“This new rule is illegal and unconstitutional. It circumvents the normal legal process, along with Congress, to claim emergency powers to impose a mandate on American business,” Rick Esenberg, president and general counsel at the Wisconsin Institute for Law & Liberty, which is representing two businesses suing the administration over the standard, said in a statement.

Multiple lawsuits were filed within hours of the rule being unveiled. Many of them described it as a mandate.

The administration is citing the Occupational Safety and Health Act, a federal law enacted in 1970 after being passed by Congress and signed by then-President Richard Nixon.

The act lets OSHA issue an emergency standard “if the agency determines that employees are subject to grave danger from exposure to substances or agents determined to be toxic or physically harmful or from new hazards, and an ETS is necessary to protect employees from such danger.” The agency says SARS-CoV-2, or the CCP (Chinese Communist Party) virus, which causes COVID-19, constitutes a grave danger.

“I don’t believe we’re overstepping our bounds here,” Walsh said, adding that he’s confident, like other administration officials, that the standard will withstand legal challenges.

Using the labor secretary’s rationale, a different requirement issued Thursday is a mandate.

The Department of Health’s Centers for Medicare and Medicaid Services separately announced that it’s requiring health care workers at facilities that receive funding from Medicare or Medicaid get vaccinated against the CCP virus. Those facilities, which employ over 17 million workers, are governed by the requirement, not the OSHA standard.

They do not have a testing opt-out option.

Asked what would happen to the health care workers who refuse to get a vaccine, Walsh said on PBS, “Employers will be able to take the action that they think is right.”