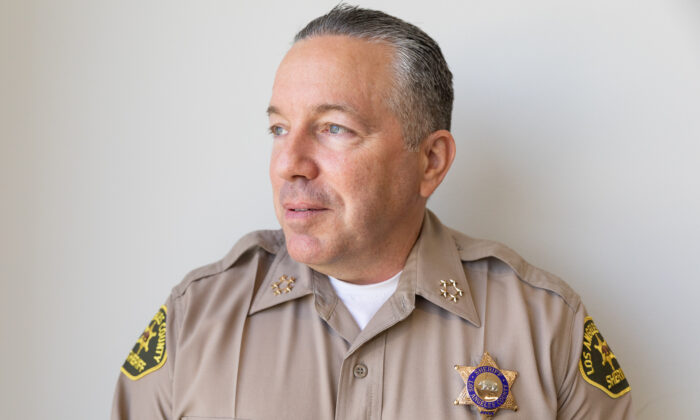 LA County Sheriff Alex Villanueva has criticized the Los Angeles County Board of Supervisors’ budget for the 2021–22 fiscal year for containing several initiatives that mark a significant shift in the county’s approach to criminal justice.

At $39.9 billion, this year’s budget is the largest in county history, and 7.8 percent higher than the budget amount approved in April; $975 million coming from the American Rescue Plan, according to LA County Chief Executive Officer Fesia Davenport.

Then the budget allots $461.5 million to several strategies supporting the county’s new “Care First, Jails Last” initiative, which will provide alternative approaches to criminal justice and incarceration, which includes an anti-racism and diversity initiative, a poverty-alleviation initiative, and the creation of a jail-closure team to close the Men’s Central Jail. The Youth Justice Reimagined program will also be redesigned to focus on youth development and well-being, with an additional $27.4 million in one-time funding to go to the Youth Development Department.

Another $527 million will go to address the county’s rising rates of homelessness by developing more housing and services, with $494 million coming from the Measure H quarter-cent sales tax.

The shift in the criminal justice approach reflects an ongoing debate over LASD funding and investing in community outreach and alternative public safety programs.

Villanueva said that the community won’t see any of the $461 million given to the Care First, Jail Last plan.

“They’re going to hire a lot of consultants, a lot of their friends, a lot of these service providers and 501cs with the very fancy highly-paid board of directors making six figures, and what comes out of that is going to be a trickle, just like with the homeless industrial complex,” Villanueva said. “We’ve seen this show before. But they’ll pat themselves on the back and congratulate themselves for a job well done … as the capacity to fight crime gets degraded.”

Supervisor Holly Mitchell said during the Oct. 5 meeting that the move is intended to help those who have been “historically disenfranchised” by the county’s criminal justice system. Mitchell said she recently paid a visit to the Men’s Central Jail Inmate Reception Center.

“We’ve seen what incarcerated people and county staff are dealing with every day,” Mitchell said. “There is no doubt in my mind that we are still in a state of emergency.”

The Board will, however, allocate $4.2 million to the LASD to combat illegal cannabis growth in Antelope Valley. Of the total amount, $1.2 million is for the department’s Marijuana Eradication Team to eliminate the grows, $503,000 will go toward overtime for patrol at the Lancaster Sheriff’s Station, and $707,000 will purchase 10 trucks needed to conduct investigations on rough terrain, according to a statement by Supervisor Kathryn Barger.

Supervisor Sheila Kuehl didn’t respond to a request for comment by press time.