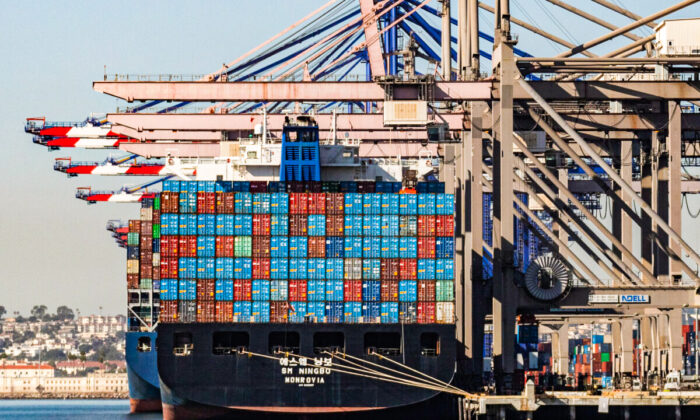 Cargo containers are stacked on a ship at the Port of Long Beach, Calif., on Oct. 27, 2021. (John Fredricks/The Epoch Times)
Southern California

The waters off the coast of Southern California continued to see record-breaking numbers of cargo ships this week as one city opened its harbor to help with the overflow.

The ports broke a new record on Nov. 9, with 168 ships waiting to unload goods. That included 55 ships drifting at sea, 48 at anchor, and 65 ships docked.

Another record fell the same day when 49 container ships were forced to drift off the coast, unable to anchor or dock at the overloaded twin ports.

The ships were forced to run their engines and “loiter” in designated areas off the coast, maintaining a buffer of three miles from each ship and three miles from land and the shipping lanes, until they’re assigned an anchorage or a terminal position to offload cargo.

Floating cargo ships and tankers loaded with holiday gifts, wood, cars, and other goods took up positions around Catalina Island, San Clemente, and down the coast off Huntington Beach and Oceanside.

The coastal city of Huntington Beach has opened its eight anchor spots to allow cargo ships anchorage during the crisis. All eight spaces were occupied, Louttit said.

A Huntington Beach’s Harbor Commission spokesperson was not immediately available.

Residents, business owners, and tourists on Catalina Island could see the buildup of cargo ships floating nearby on the channel, but the recent foggy weather has helped to cloak them, Jim Luttjohann, CEO of Love Catalina Island, the tourism authority of the island, told The Epoch Times.

“It’s fairly invisible to us, unless you’re on one of the passenger ferries going back and forth, and then it becomes more obvious because you’re looking out and seeing them,” Luttjohann said. “There may have been a few weeks back before they went to the 24-hour operations, I feel like they were slightly more visually apparent then.”

Residents on the island weren’t affected by the ships, Luttjohann said, other than not being able to get a certain tool or part as quickly as they were accustomed to before the backlog.

The Port of Los Angeles reported that eight oil tankers were at anchor or drifting on Nov. 10 at its port. This was a “normal” number for the port, Louttit said.

At the Port of Los Angeles on Nov. 10, 21 vessels were docked, including 17 container ships and three cruise ships.

At the Port of Long Beach, 13 ships were at terminals.

More ships are headed into the area, but the flow remains typical, Louttit said.

The ports are expecting 42 more ships to arrive over the next three days, which is 5 more than the “normal” level of 37 based on pre-pandemic levels, according to the Maritime Exchange. Of these arrivals, 16 container ships are scheduled to arrive.

“The flow actually in and out is very normal,” Louttit said. “The problem is, they need to get more of the ones at anchor into the port.”