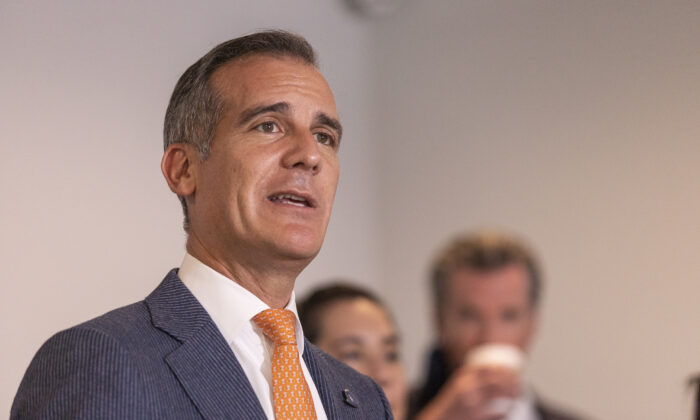 LOS ANGELES—Los Angeles parents are calling on county officials to end the mask mandate for students after Mayor Eric Garcetti and other celebrities were pictured maskless at the Super Bowl LVI on Feb. 13 at SoFi Stadium in Inglewood, California.

Bipartisan parent group Outraged LA Parents said it was “deeply disappointing, but not at all surprising” to see Garcetti and other public figures unmasked at the Super Bowl despite the county’s mask mandate for outdoor mega-events.

“Our public leaders have time and again failed to lead by example,” the group told The Epoch Times in a statement. “Not just by flouting the very rules they set, but by continuing to impose harmful rules on our least vulnerable population (children) so that they can continue to do whatever they want.”

LA County’s Public Health Department Director Dr. Barbara Ferrer also attended the Super Bowl and remained masked, saying in a video that she was glad people were “trying to protect themselves.”

“It’s wonderful to be with people again, to celebrate,” Ferrer said. “This is an amazing achievement for the Rams, and for LA County, so I’m glad we’re open, I’m glad people are trying to be sensible and protect themselves.”

Outraged LA Parents said if Ferrer was concerned about COVID-19 spread outdoors, she would have skipped the Super Bowl.

“Instead she sat there adjusting her mask repeatedly, surrounded by maskless fans, and did absolutely nothing about it,” the group said. “And the next day, parents across Los Angeles sent their children back to school fully masked, subject to discipline for violation, and again exacerbating learning loss, mental anguish, anxiety, and loneliness.”

The statewide indoor mask mandate is set to expire on Feb. 15, and California’s Health and Human Services Secretary Dr. Mark Ghaly said on Feb. 14 that the state’s mask mandate for students may be lifted pending a Feb. 28 reassessment of COVID-19 case rates.

Ghaly noted, however, that individual counties or school districts could still require masks in schools after the state lifts its mandate.

In LA County, Ferrer said last week that she would continue the county’s indoor mask mandate, which also covers schoolchildren, for “at least a few weeks” after the state’s mandate ends, depending on the county’s own case rates.

Ferrer’s announcement received criticism from parents, who cited research studies reporting that children have the lowest rates of COVID-19 transmission.

“It would be one thing if the rules they impose on our children were backed by science, but they aren’t,” Outraged LA Parents said. “Study after study from across the nation, and even the world, show that masking school children has no material effect on the spread of [COVID-19].”

This comes just two weeks after Garcetti and other state officials—including Gov. Gavin Newsom and San Francisco Mayor London Breed—received criticism for posing maskless during a Jan. 30 playoffs game at the same stadium.

“I wore my mask the entire game. When people ask for a photograph, I hold my breath and I put it here [in hand] and people can see that,” Garcetti told reporters on Feb. 2. “There’s zero percent chance of infection from that.”

“I’ll take personal responsibility, and if it makes you and everybody else happy—or even the photographs with people where I’m literally holding my breath for two seconds—I won’t even do that,” Garcetti said.

A spokesperson for Mayor Eric Garcetti, the LA County Department of Public Health, and SoFi Stadium, didn’t respond to requests for comment by press time.