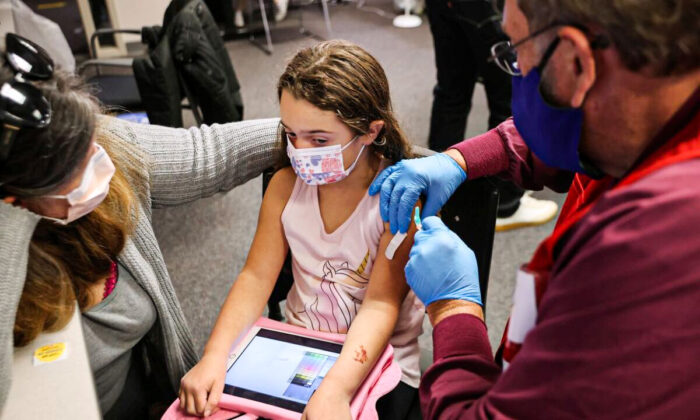 The Los Angeles school board on Tuesday agreed not to require children to be vaccinated against COVID-19 until next fall, pushing back a Jan. 10 deadline as thousands of students remain unvaccinated.

The Los Angeles Unified School District vaccine mandate was postponed after board members raised concerns that students in California’s largest school district could be pushed into independent study, the Los Angeles Times reported.

The decision follows a proposal on Friday announced by Interim Los Angeles Superintendent Megan K. Reilly. She couched the move as an example of the vaccination program’s success, saying that nearly 87 percent of students aged 12 and older were in compliance with the policy. The extension would give others an opportunity to also become inoculated, she said.

“This is a major milestone, and there’s still more time to get vaccinated,” Reilly said on Friday.

The district will now continue to require weekly testing of all students through the month of January. After that it will only test students who don’t have proof of vaccination.

Some 28,000 students remain unvaccinated, according to the Los Angeles Times.

“I felt like we were ending up with a situation in which those who complied would be the most negatively affected,” school board member Jackie Goldberg said, the Los Angeles Times reported. “I think we have no choice.”

“I want to tell those of you who come and … think you pushed us back. No, you didn’t. The mandate remains,” she added.

Incoming Superintendent Alberto Carvalho called the move “the right decision” during a news conference on Tuesday.

“The conditions that the board is facing today, and the policy adjustments are not, in my opinion, a reversal of decisions made,” he said.

Carvalho described the move as “an evolution of the previous board position” that recognizes what is best for students in the district.

“What we are announcing here today, a statewide requirement for in-person instruction for all of our children to add to a well-established list that currently includes ten vaccinations and well-established rules and regulations that have been advanced by the legislator for decades. To add to that list, the vaccination for COVID-19, we intend to do that once the FDA has fully approved the vaccine which will give us time to work with districts,” Gov. Gavin Newsom said during a press briefing on Oct. 1.

The move drew criticism from some.

Mari Barke, chair of the Orange County Board of Education, said that it should be up to parents to decide what is best for children.

“I’m certainly not proud that California is the first state to mandate this. I think parents are the best to make these types of decisions for their children, so I’m very disappointed,” Barke told The Epoch Times.

“I believe strongly in parental rights and parents knowing what’s best for their children. This vaccine has had the least testing of any vaccine. It’s not a virus that is killing lots of children unless they have severe comorbidities, and I think it’s government overreach.”

Vanessa Serna and Reuters contributed to this report.