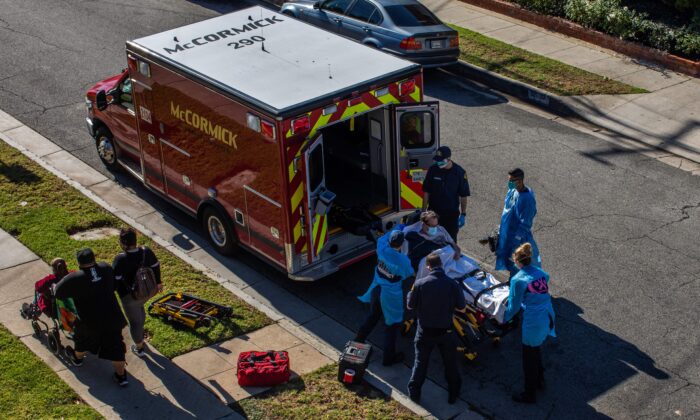 After administering him with oxygen, Los Angeles paramedics load a potential COVID-19 patient in the ambulance before transporting him to a hospital in Hawthorne, California, on Dec. 29, 2020. (Apu Gomes/AFP via Getty Images)
AMERICA

Los Angeles ambulance crew members have been instructed not to transport patients with “little chance of survival” to local hospitals as ICUs near capacity across the county.

In a directive (pdf) issued by the Los Angeles County Emergency Medical Services Agency Monday, ambulance workers were also told to conserve the use of oxygen in the state’s most populous county, which currently has an infection rate of 138 per 100,000, according to California’s tracking dashboard.

According to county health data (pdf), there were just 17 adult ICU beds available, with 7,544 hospitalizations as of Monday evening.

The county EMS directive states that due to bed shortages, ambulance crews should no longer transport patients to hospitals if their hearts have stopped and resuscitation attempts have failed, according to the Los Angeles Times.

Due to oxygen shortages in Los Angeles, effective Monday EMS has been instructed to only administer supplemental oxygen to patients with oxygen saturation below 90 percent. The memo states that a level of 90 percent is sufficient for the majority of patients to maintain normal bodily functions.

California Gov. Gavin Newsom meanwhile announced Friday that the state would collaborate with the U.S. Army Corps of Engineers to evaluate and upgrade outdated oxygen delivery systems at six hospitals in Los Angeles.

“The steepness of this line is frightening in its implications for our health care system, our health care workers, and all the people we care about,” Dr. Barbara Ferrer, director of the Los Angeles County Department of Public Health, said during a press briefing on Monday, referring to the recent surge in cases of COVID-19, the disease caused by the CCP (Chinese Communist Party) virus.

“We’re likely to experience the worst conditions in January that we’ve faced the entire pandemic, and that’s hard to imagine,” she said.

“This is likely to be the worst month of the pandemic,” the county added in a statement. “The surge from the holiday gatherings is here and cases will increase due to parties and travelers returning to LA County.”

Newsom said that California is working on providing support for home oxygen usage in a bid to ease pressure on local hospitals, allowing for “more availability and more capacity within our existing facilities.”

“We’re just looking at the panoply of oxygen support … across the spectrum and looking how we can utilize more flexibility and broader distribution of these oxygen units all up and down the state, but particularly in these areas—San Joaquin Valley and Los Angeles, the larger Southern California region—that are in particular need and are under particular stress,” Newsom said.