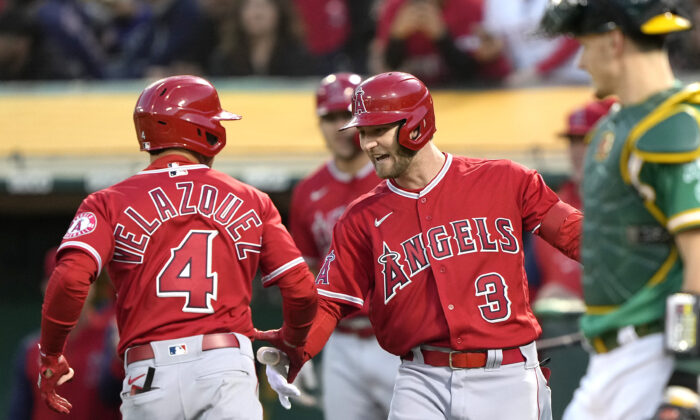 Andrew Velazquez #4 of the Los Angeles Angels is congratulated by Taylor Ward #3 after Velazquez hit a solo home run against the Oakland Athletics in the top of the fifth inning at RingCentral Coliseum, in Oakland, Calif., on May 13, 2022. (Thearon W. Henderson/Getty Images)
Baseball

As the 21-year-old 11th-round draft pick from the University of Arizona, Silseth became the first player from the 2021 draft class to reach the Major League.

“I’m speechless, I’m still processing everything,” Silseth said. “Heck of a day, heck of a day. It’s a dream to get a phone call or manager telling you that you’re going to the big leagues to start a game. When I was initially told, I was emotional because my uncle died this past fall and the last thing he told me was I was going to make it. So that was for him tonight.”

The New Mexico native was just promoted having dominated at the Angel’s Double-A Rocket City farm club, with a 1.73 ERA in five starts, including 37 strikeouts in 26 innings.

Silseth allowed just one hit in six innings, striking out four, and walking two before being relieved after throwing 81 pitches in front of his family who was in attendance.

He became the second player in Angels’ history to pitch six or more innings giving up one hit or less in a debut. Rudy May also threw a one-hitter in nine innings in his maiden start against the Tigers in April 1965.

“I loved the first pitch of the game,” said Angels Manager Joe Maddon. “It means it was in control of his emotions and nothing was too quick. He dotted it at 96 mph [on his first pitch] and he continued to do that.”

Silseth recorded his first career strikeout in the first inning against Sheldon Neuse with a variety of pitches ranging from a missed fastball of 98.4 mph to a 96.9 mph four-seamer for a strike, an 85.6 mph slider, and an 87.8 mph splitter.

“To get it out of the way was awesome,” Silseth said. “But you have to stay in the fight at that point and just keep going, because you’ve still got a whole ballgame.”

After giving up the single in the third inning to Elvis Andrus up the middle, Silseth followed with an 11-pitch walk to Tony Kemp.

Jed Lowrie then hit a fly ball to deep left and Andrus attempted to tag up to third base. But Angels left fielder, Brandon Marsh, rescued Silseth with a great throw to beat Andrus to third base to end the inning.

“That was huge,” Silseth said. “When people are playing good defense behind you, it allows you to be yourself and fill up the zone. The pitch selection in the third inning was maybe too much offspeed early in counts rather than just getting ahead. Trying to throw putaway pitches instead of strike pitches in the third. That was the main difference going from the fourth to the sixth.”
Angels relievers, Aaron Loup in the seventh inning, Ryan Tepera in the eighth, and Raisel Iglesias in the ninth, came in to contribute to the two-hitter shutout.
“Getting through the sixth was big because it set up our bullpen perfectly,” added Maddon. “I believe he [Silseth] can pitch like that often. He’s a strike-thrower with good stuff. Good fastball, really good splitter, nice little slider. So a great first impression.”
A’s starter Daulton Jefferies (1-6) also pitched six solid innings, but gave up a double by Anthony Rendon in the fourth inning. After an out, Brandon Marsh hit an RBI single bringing home Rendon.
Andrew Velazquez hit his second career major league homer with a solo shot in the fifth inning for a final of 2–0.
The Angels sit in second in the AL West Division a half-game behind the Houston Astros (22–11).
Game two of the series is Saturday at 1:07 p.m. (PST).