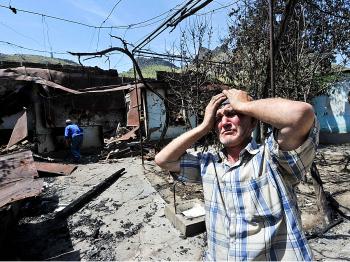 An ethnic Uzbek holds his head in his hands as he stands beside the wreckage of his burned out home in Osh on June 14, 2010. Deadly gun battles raged in the Kyrgyzstan city of Osh where bodies littered the streets as ethnic violence escalated and Uzbekistan raced to cope with a massive refugee influx. (Victor Drachev/AFP/Getty Images)
Europe

Clashes between ethnic Uzbek and Kyrgyz began on June 10 in the southern city of Osh, ostensibly after a fight between members of the two different ethnic groups in a casino, and then spread through the city and neighborhoods, including Jalal-Abad, Bazar-Kurgan and Nariman village.

Human Rights Watch (HRW) says in its report that government forces were reluctant to try to quell the violence.

"It's clear that the massive ethnic violence posed colossal challenges for Kyrgyz security forces. Yet we found that some of the security forces became part of the problem rather than the solution," said Ole Solvang, emergencies researcher at HRW and one of the authors of the report, in a statement.

Witnesses from the affected areas told the organization that men in camouflage uniforms on armored military vehicles had cleared makeshift barricades on the streets allowing armed men to enter the area. Those armed men then shot and chased away residents and looted and torched their homes.

“An additional question that requires investigation is whether they actively participated in these attacks, and if so, to what extent,” the report says.

HRW says it has documented a range of sweeps in which military forces ransacked homes and abused locals in the areas around Osh.

Kyrgyz authorities themselves have launched an investigation into the violence, which now consists of over 3,500 criminal cases.

The HRW report is based on over 200 interviews with Kyrgyz and Uzbek victims and witnesses, lawyers, human rights defenders, government officials, and law enforcement personnel.

The June mayhem in the southern region left at least 371 people dead, but the real death toll might be several thousands.

The violence had followed a coup in April that disposed President Kurmanbek Bakiyev and left about 80 people dead.

About 400,000 Kyrgyz and Uzbeks had fled for their lives in the clashes, many crossing into neighboring Uzbekistan.

While most refugees have now returned to Kyrgyzstan, they face tough conditions—many of their homes were destroyed and the government has made little effort to start rebuilding them, and winter will soon be approaching, according to HRW.

Kyrgyz authorities claim that the violence was planned sabotage implemented by officials loyal to the disposed president.

The United Nations has also said that the violence was not spontaneous, but was organized and targeted.

“Actually, there is still [a] tense atmosphere between Uzbek and Kyrgyz communities in [the] southern region as well as between military forces and Uzbek people,” said  Rachel Denber, HRW Europe and Central Asia deputy director.

“Uzbek communities continue to fear because they can’t rely on authorities’ protection. They are afraid of low enforcement forces,” she added.

In Kyrgyzstan's south is the Fergana Valley, a strip of land sandwiched between Uzbekistan and Tajikistan.

The valley has always been a powder keg for ethnic violence, as many different minorities live there. Twenty years ago, several hundred people were killed in ethnic conflicts between Kyrgyz and Uzbeks in Osh and Uzgen, in the Kyrgyz territory.

The violence is a cause of concern for United States that has a military base there, which serves as an important transit center for troops and warplanes going to Afghanistan.

The impoverished, clan-based country of 5 million people held a constitutional referendum resulting in the first Central Asian, post-Soviet country to create a European-style parliamentary system. The country is expected to have parliamentary elections in October.