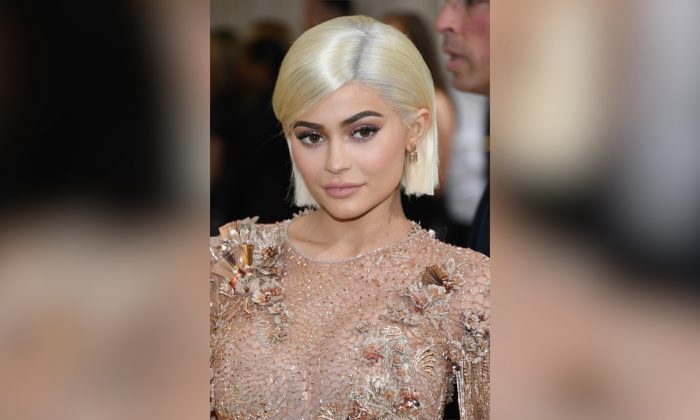 She wrote that they are “partners in crime 4 evaaa.”

“Why you park in handicapped spot you’re not handicapped!!! Those people really might need it!” wrote one person.

Added another: “Is that his jacketbc its too big for her. Shame on you guys for parking in a handicapp space. Guess you wouldnt know what its like to be handicapp. Coing from a handicapp person [sic].”

A third asked them, “Sooo, Which one of y’all are handicap?”

“Are we ignoring the fact that they’re parked in handicap,” another person observed. “Or maybe it’s just the angle.”

And yet another commenter, who claimed to be disabled, left a verbose, critical message for Jenner.

“Are you aware where you have parked? Handicap parking is for people that have disabilities and can’t walk far! I’m disabled and disgusted that you think that you have the right to park there just because you’ve been on a show and think you are above everyone. I can hardly walk and to see this wow! #somerolemodel #whodoyouthinkyouare @people are you going to let this story slide!! Celebrities are not handicap and have no right to Park where, people like me that can’t walk far and do need a handicap spot @lapdhq I believe there is a fine for parking in a handicap spot! If Celebrities can get way with this..what else can they get away with!” the person wrote.

Meanwhile, on July 22, The Ruderman Family Foundation, an advocate for disabled people, criticized the photo.

“Accessible parking is meant for people with disabilities who need it,” said Jay Ruderman, the foundation’s president, told People magazine. “As a role model to many, this is an opportunity for Kylie Jenner to use her celebrity status to help society understand why accessible parking is a basic right for people with disabilities to be included in daily life.”

Jenner hasn’t commented on the matter.

In 2015, she came under fire for posing in a wheelchair for a magazine spread.

“It’s disappointing to see people fall back on the tired and totally untrue idea that being in a wheelchair is limiting,” Ian Ruder, the editor of New Mobility, told People magazine at the time. “I think most wheelchair users, myself included, would tell you that our wheelchairs are empowering and enable us to fully live our lives.”

Over the weekend, New England Patriots quarterback was criticized on social media for jumping off a cliff with his 6-year-old daughter in a viral video.

In the clip, the six-time Super Bowl champion is seen with his daughter at a swimming spot in Costa Rica. The girl appears hesitant before they both jump, as Brady held her by the arm.

Brady did not want to dive in alone … Good ole Tom 😂

In a tweet, Brady wrote that if his daughter, Vivi, “is going to be an Olympic champion one day, it probably won’t be synchronized diving.” He added, “Daddy always gives her a 10 though.”

She landed in the water, but some people said it was dangerously close to rocks.

“Anything for a selfie … This irresponsible act follows Brady’s dimwitted wife posting pics of their children riding horses without helmets. Tom Brady DRAGS daughter off dangerous cliff after she hesitates before jump,” said one woman on Twitter, slamming him with the hashtag, “#DumbJock.”