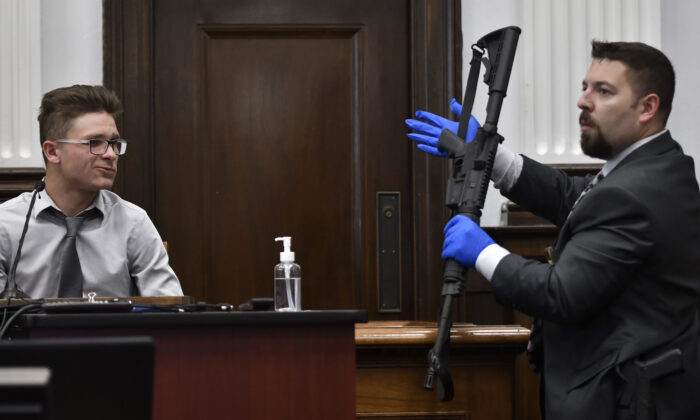 The rifle Kyle Rittenhouse used in Kenosha, Wis., on Aug. 25, 2020, is presented during Rittenhouse's trial in the city on Nov. 2, 2021. (Sean Krajacic/Pool/Getty Images)
US News

Kyle Rittenhouse is seeking the return of the firearm he used to shoot three people in Kenosha, Wisconsin in 2020.

The Smith & Wesson M&P 15 rifle was seized by Kenosha police officers after the shootings.

Rittenhouse “is the lawful owner” of the gun, attorney Mark Richards said in a filing in Kenosha Circuit Court this week.

Rittenhouse’s friend Dominick Black bought the gun when Rittenhouse was 17 but verbally agreed to hand it over to Rittenhouse when he turned 18.

Wisconsin law allows any person who claims the right to possession of property seized by authorities to ask for its return in circuit court.

Rittenhouse wants to make sure the gun “is properly destroyed,” Richards said.

The lawyer said he previously asked Kenosha County assistant district attorneys Thomas Binger and Jim Kraus to authorize the release of Rittenhouse’s personal property, “however, this has not yet occurred.”

He noted that all proceedings and investigations in which the property might have been required have been completed, including the prosecution of Black.

It’s not clear when the court will respond to the request, which also asks for other property seized by police, including an iPhone, a $1 bill, and a pair of brown boots.

The Kenosha County District Attorney’s Office did not immediately respond to a request for comment.

Rittenhouse faced six charges from the shootings but was acquitted on all counts late last year.

Black avoided jail time by pleading no contest to a misdemeanor earlier this month.

Rittenhouse said on “The Charlie Kirk” several days later that he wanted the gun he used destroyed.

“We don’t want anything to do with that,” he said.

Rittenhouse also recalled being stunned when Binger brought in the rifle during the trial and becoming afraid when Binger pointed the gun at people in the room.