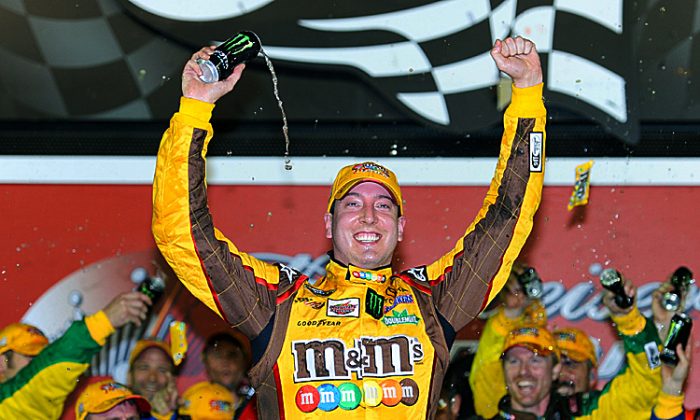 Two-car drafting pairs are out, but multi-car pileups are back at Daytona: that’s the message of the 2012 NASCAR Budweiser Shootout, the first race of the season for North America’s biggest racing series.

“Wild Thing” Kyle Busch survived wrecks and near-wrecks to push his battered Toyota past Tony Stewart’s Chevrolet at the finish line to win the Shootout by the smallest margin—.013 seconds— in history.

“Amazing race,” Busch told FOX Sports. “How many times did I spin out but I didn’t spin out?

“The M&Ms Camry was fast and fun to drive when I wasn’t getting turned around—tough race but a fun race.

“First race back in the M&Ms car and we’re on Victory Lane, so that’s pretty cool.”

Busch made a few amazing saves while cars all around his wrecked, his M&Ms Toyota spinning, sliding, and showering sparks, but Busch’s skills kept it off the barriers and away from his crumpled competitors.

After the final big wreck, Busch in his wrinkled Toyota pushed the Office Depot Chevrolet of Tony Stewart into the lead on the last lap of the Green-White-Checker finish, then pulled off a perfectly times slingshot pass to take him at the line.

‘Big Ones’: Once Was Not Enough

Four separate multi-car wrecks thinned the field as new aerodynamic changes stopped the drafting duos which ruled Daytona last season, but also made the cars less stable—taps that would have been inconsequential a year ago set off major accidents, made worse by the fact that cars couldn’t escape from the pack.

The mayhem started on lap nine, as eight cars got caught up in the wreck resulting from David Ragan tapping Paul Menard between Turns One and Two. This was the first sign drivers had that any contact between the center of the front bumper of the pushing car and the left rear bumper of the lead car invariably caused a spin.

The lesson was repeated on lap 31 when Martin Truex nudged Clint Bowyer—but even before the wreck, Bowyer’s car was fishtailing severely. His was not the only car—the new one-inch-shorter rear spoiler has made the rear ends of all the cars a lot looser.

The next big wreck came on lap 54, when Marcus Ambrose touched Joey Logano’s left rear, setting off a wreck which claimed another half-dozen drivers.

The final big pileup came just one lap from the scheduled finish, as Jeff Gordon nudged Kyle Busch, then rose up the track into Kurt Busch, turning the pair sideways and collecting Jimmie Johnson, flipping Gordon’s car onto its roof.

No one was injured, but a lot of fast cars ended up in the garage.

Teams have a week to repair the damage and make adjustments based on what they learned at the Shootout. After the Gatorade Duels at Dayton on Feb. 23, the full field  will be back on track next Sunday for the official season opener, the Daytona 500, which starts at 12 noon, Feb. 26. Tickets and travel packages are available through MyRaceTravel.com, or through the Daytona International Speedway website.