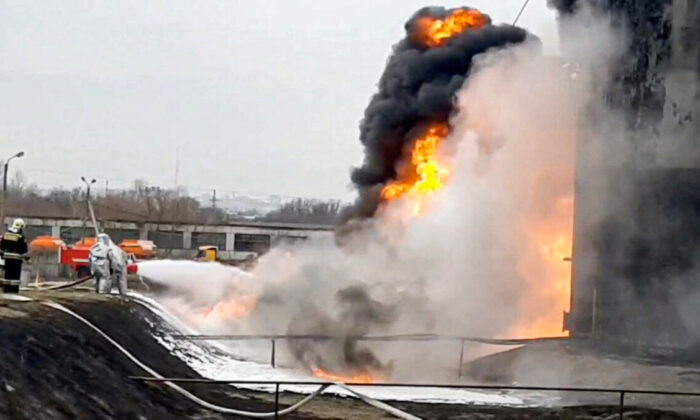 The Kremlin on Friday accused Ukraine of a military strike against a fuel depot in the Russian city of Belgorod while saying that the attack was unhelpful for the progress of Russia-Ukraine peace talks, which were set to resume on Friday.

Kremlin spokesperson Dmitry Peskov told reporters on Friday that the strike, which Ukraine has neither confirmed nor denied, would do nothing to build trust between the two sides and could jeopardize peace talks.

“Clearly, it’s not what could create conditions for further talks,” he said, according to Russian state-backed media Tass.

Russian President Vladimir Putin had been informed about the Belgorod incident, according to state-backed media RIA Novosti.

The Kremlin’s claim that Ukraine carried out the attack could not be verified and Ukrainian Foreign Minister Dmytro Kuleba said on Friday he could not confirm or deny Ukraine’s alleged involvement in the Belgorod fuel depot strike, citing a lack of familiarity with details of military operations.

“I can neither confirm nor reject the claim that Ukraine was involved in this simply because I do not possess all the military information,” Kuleba said at a briefing in Warsaw, Poland, where he met with top officials to discuss the latest frontline developments in Ukraine.

Met with Polish Minister of the Interior and Administration @Kaminski_M_. Poles are not just helping Ukrainian women and children fleeing Russian bombs to Poland. Poles have been truly embracing Ukrainians as if they were family members. We will forever be grateful for this. pic.twitter.com/H3n3Qyqv5Z

Anastasia Golodova, a spokesperson for the airport in Belgorod, told Tass on Friday that two helicopters of the Ukraine armed forces had carried out two strikes that caused a fire at the city’s oil depot.

Golodova said the airport hadn’t sustained any damage and there were no casualties.

Footage posted on social media showed what appeared to be multiple rocket attacks from helicopters followed by a massive explosion, while another video showed a helicopter flying away from the scene as a blaze lit up the sky in the background.

Kuleba said Ukraine was waiting for Moscow’s formal response to Kyiv’s proposals laid out at peace talks in Turkey earlier in the week.

A centerpiece of the proposal put forward by Ukrainian negotiators in Istanbul on Tuesday was that Kyiv would renounce its bid to join NATO in exchange for security guarantees similar to the pact’s Article 5 arrangement where an attack on one member is considered an attack on all.

While a number of Western countries have expressed willingness to provide some form of security guarantees, there has been reluctance for commitments to intervene militarily in case Ukraine is attacked.

It comes as Russia-Ukraine peace talks resumed in video format on Friday, the 37th day of the war, according to Moscow’s chief negotiator Vladimir Medinsky.

“Our positions on Crimea and Donbass have not changed,” Medinsky said in a message on Telegram.

One of Moscow’s demands is for Kyiv to recognize Crimea as belonging to Russia and acknowledge the independence of the separatist-controlled Donetsk and Lugansk regions, known collectively as Donbass.

Medinsky said after Tuesday’s negotiations in Istanbul that he would pass along to Putin the terms proposed by Ukraine and come back later with a response.

There appears to be little hope for a breakthrough in talks in the near term, however.

Italian prime minister Mario Draghi, who spoke to Putin by phone on Wednesday, said that Putin told him that “small steps had been taken in the talks” so far but that the conditions “did not exist” for stopping military action.