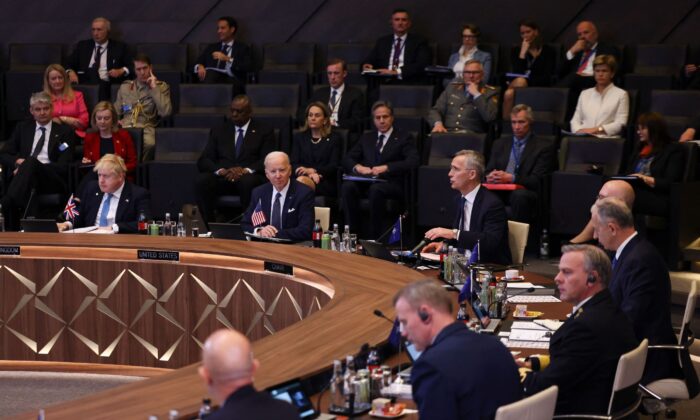 The Kremlin criticized the North Atlantic Treaty Organization (NATO) for engaging in a proxy war with Russia through Ukraine.

“If NATO essentially engages in war with Russia through a proxy and is arming that proxy, war means war,” Russian Foreign Minister Sergei Lavrov said in a wide-ranging interview broadcast on Russian state television on Monday.

He repeated Russia’s stance that it is legitimate to target weapons provided by Ukraine’s Western allies.

Lavrov claimed that the risk of a nuclear war is “considerable” now.

“I would not want to elevate those risks artificially. Many would like that. The danger is serious, real. And we must not underestimate it,” he said.

U.S. Secretary of Defense Lloyd Austin responded Tuesday that threats of the war in Ukraine escalating into a nuclear conflict are “very dangerous and unhelpful.”

“Nobody wants to see a nuclear war happen. It’s a war that all sides lose,” Austin said. “And so rattling of sabers and, you know, dangerous rhetoric is clearly unhelpful and something that we won’t engage in.”

Moscow’s warning came as NATO members are providing more and deadlier weapons to Ukraine to confront Russia in the east and south where the two countries have been involved in disputes for years.

Germany confirmed Tuesday that it will provide “Gepard” anti-aircraft tanks to Ukraine in a notable policy shift.

“Yesterday we decided that Germany will make the delivery of ‘Gepard’ anti-aircraft tanks possible to Ukraine,” German Defense Minister Christina Lambrecht said in a transcript of her speech seen by Deutsche Welle.

Western countries are also providing training in Poland, Germany, and the United States.

The Biden administration said Monday that it wants Russia’s military to be weakened to the extent of not being able to launch an invasion similar to the one in Ukrainian.

When asked about the United States’ “goals for success” amid the conflict, Defense Secretary Lloyd Austin responded, “Ukraine remains a sovereign country, a democratic country, able to protect its sovereign territory.” But then he told reporters that he wants to see Russia’s military capacity diminished.

“It has already lost a lot of military capability and a lot of its troops, quite frankly, and we want to see them not have the capability to very quickly reproduce that capability,” Austin added.

“We want to see Russia weakened to the degree that it can’t do the kinds of things that it has done in invading Ukraine,” Austin told reporters, according to a transcript.

Reuters and Jack Phillips contributed to the report.