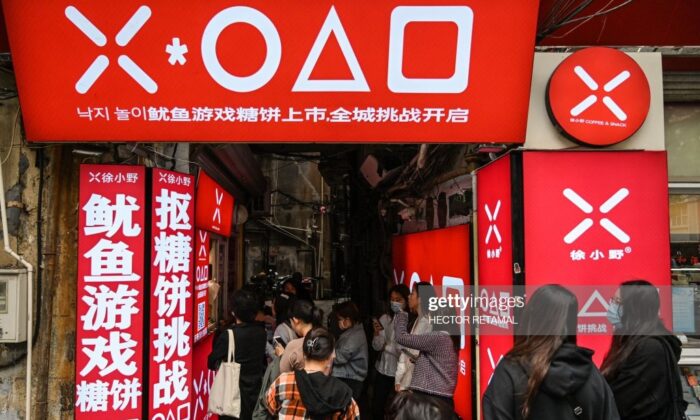 Customers are lining up at a small shop to buy dalgonas, a crisp sugar candy featured in Squid Game, in Shanghai, China, on Oct. 12, 2021. (Hector Retamal/AFP via Getty Images)
Asia & Pacific

Although Netflix hasn’t entered the Chinese market, this didn’t prevent its global hit, a Korean drama Squid Game, from creating a boom in China. Online shopping sites filled with imitation derivative products from the drama. Korean officials are trying to protect their intellectual properties.

The Chinese Communist Party (CCP) has imposed a “Korean restriction order” to retaliate against South Korea over its deployment of the Terminal High-Altitude Air Defense (THAAD) missile system from the United States five years ago. The sanctions are targeted at the importation of South Korea’s pop-cultural which has swept Southeast Asian countries and China. Since then, Chinese TV Stations no longer air Korean TV programs, and most Korean artists’ commercial events had been canceled. Yet those sanctions have failed in preventing Chinese businesses from pirating Korean programs and continuing to broadcast them on the websites, often with Chinese subtitles and only one day after they premiere in Korea.

China is notorious for its rampant piracy of intellectual properties. A current example involves its pirating of Netflix’s global hit series, Squid Game. Although Korean entities own the copyrights to this program and its promotional materials, businesses in China have been illegally profiting from its rapid success and growing appeal among viewers. This has sparked sharp criticisms from Koreans.

During a presentation to the Korean parliament on Oct. 6, Jang Ha-sung, Korea’s ambassador to China said over 60 Chinese websites were illegally broadcasting Squid Game. A high volume of viewers had also been enabled to freely download videos designed to imitate the popular program. This was occurring before Netflix had even entered the Chinese market.

Squid Game’s popularity in China is undeniable. As of Oct.17, Weibo, the Chinese social media site, had accumulated 2.06 billion hits in response to the topic, “Why is Squid Game so hot?”

Also undeniable is the program’s profit potential. An internet search shows that multiple Chinese retailers have trademarks pending for the production and sale of Squid Game’s merchandising products like masks, costumes, food, and other props. Some have already begun selling these products on the Chinese site Taobao, the Korean sites Coupang and G Market, and globally on Amazon and eBay. A search on eBay reveals over 20,000 imitation products from Squid Game.

On Oct. 14, Choi Hyeong-du, a member of Korea’s National Assembly (People Power Party) called for an end to China’s pirating activities by requesting the “protection of intellectual property rights.” He claimed that although the Chinese regime may not have been involved, it had not prevented retailers from imitating and selling Squid Game properties. He said, “Just as the U.S. released the list of countries that infringed on its intellectual property rights, we should also openly disclose the cases of infringement.”

Similarly, a Korean National Assembly member (Democrat Party), Jung Chung-rae, agreed on the problem with illegal downloading of Squid Game in China and elsewhere is serious, and “to revitalize the cultural industry, illegal theft must be prevented.” Jung noted that Korea’s BTS Boys Band was enabled to succeed only because of the prevention of free music downloads. Korea’s Squid Game should be protected as well.

During an Oct. 7 press conference, Choi Young-sam, a spokesperson for the Korean Foreign Ministry said his organization was cooperating with the Beijing office of the Copyright Commission. They requested that the CCP take immediate actions to stop the online piracy and illegal sales of Korean intellectual properties. He received assurances that actions would be taken.

Also on Oct. 7, Friends of Korea (VANK), a civil society group, launched a petition on Change.org, the world’s largest online petition site. The petition asked for support in requiring the CCP to prevent the illegal distribution of Netflix’s Squid Game. The group claimed that for the past five years, the CCP had never established a policy to protect the copyrights belonging to Korean producers of movies and TV shows. That China should enact measures to prevent repeated copyright infringements in accordance with the Korea-China Free Trade Agreement.

Within one month after airing on Sept. 17, the Netflix Korean original drama “Squid Game” had achieved worldwide popularity. By Oct. 13, it was ranked at the top of the “Today’s Viewers” charts in 94 countries. It rapidly became Netflix’s first and most popular non-English drama series to lead the top 10 in the United States for 21 consecutive days. The hit program portrays the lives of people who are struggling to make ends meet by competing in six life-and-death games for a prize of nearly $38 million.