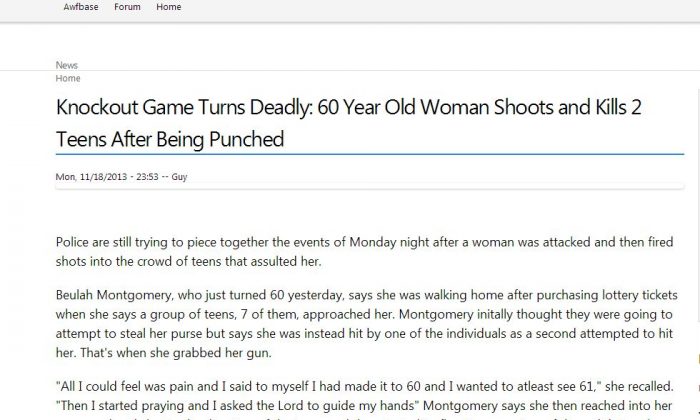 A screenshot of www.news.awfbase.com shows the heavily circulated article in question.
News

The “knockout game” is spreading across the nation, and stories about new incidents are coming out every day. But one that tells of a 60-year-old woman shooting two teens after one of the teens played the game on her appears to be fake.

The game–which is also described as “point-em-out, knock-em-out”–refers to a new phenomenon where teens try to punch random passersby so hard in an attempt to knock them out. The victims are typically strangers to the punchers.

The story in question claims that a 60-year-old woman in an undisclosed location was walking home when a group of seven teens approached her before one hit her.

The woman, which the article claims is Beulah Montgomery, then grabbed her gun from her purse and shot in the direction where the teens were fleeing. Two of them were hit and later died a result of the gunshot wounds, the story claims.

Montgomery says that she always carries a gun after getting mugged before. “Its a shame you can’t walk through your own neighborhood where you are supposed to feel safe without being assaulted and mistreated,” she said. “I purchased the gun hoping I would never have to use it, but I’m glad to still be in the land of the living.”

There’s several elements that point to this story being a fake. The original source, awfbase.com,  appears to be a site and forum where many stories are shared, some of which appear to be legitimate or semi-legitimate. But there is a lack of any location in this story. There is no street, city, or state listed as to where the purported incident took place.

Second, the person who posted the story on the site is listed as “guy.” Not exactly reassuring.

Third, besides awfbase.com, the story has only appeared on forums and on alternative news sites that mostly aggregate stories–some of which are false.

No legitimate media entities have covered this story. With knockout game stories getting such heavy coverage over the past few weeks, a story of this magnitude would be likely be splashed across mainstream media.

So it appears the story is fake until further notice.

There was a story that came out recently about a teen who tried to knock out a man in Lansing, Michigan as part of the knockout game. But he failed, and the man shot the teen twice. The teen was then sentenced to a year in jail.

There have been at least several deaths because of the game, but they have all been victims of the punchers, not the punchers themselves.

On November 19, Lawrence Hsieh, a Yale University postdoctoral associate in neurosurgery, was hit in the head and suffered a broken nose when teens attempted to knock him out. “The whole ordeal was over in 30 seconds,” he was quoted as saying.