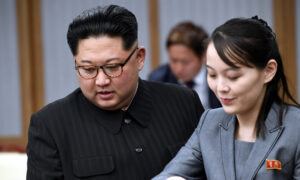 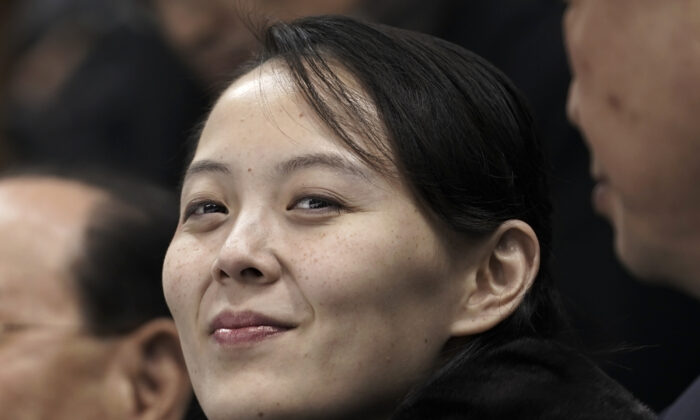 Kim Yo Jong, sister of North Korean leader Kim Jong Un, waits for the start of the preliminary round of the women's hockey game between Switzerland and the combined Koreas at the 2018 Winter Olympics in Gangneung, South Korea on Feb. 10, 2018. (Felipe Dana/AP Photo)
Asia & Pacific

In response to Kim Jong Un’s command last week ordering officials to prepare for both dialogue and confrontation, Sullivan told ABC News on Sunday that “His comments this week we regard as an interesting signal. And we will wait to see whether they are followed up with any kind of more direct communication to us about a potential path forward.”

Kim Yo Jong, vice department director of the Central Committee of the Workers’ Party of Korea, issued a statement on Tuesday, scorning Sullivan’s rhetoric.

“I heard the news that the U.S. National Security Adviser had mentioned that he regards the position towards the U.S. as an ‘interesting signal,’ which the Plenary Meeting of the Central Committee of the Workers’ Party of Korea clarified this time,” Kim Yo Jong said.

“A Korean proverb says that ‘In a dream, what counts most is to read it, not to have it.’” Kim Yo Jong continued. “It seems that the U.S. may interpret the situation in such a way as to seek a comfort for itself.”

“The expectation, which they chose to harbor the wrong way, would plunge them into a greater disappointment,” she added.

This is not the first time Kim Yo Jong showed contempt toward the Biden administration.

Early this year, Kim Yo Jong warned the Biden administration that “If it wants to sleep in peace for coming four years, it had better refrain from causing a stink at its first step.”

Sung Kim, the top U.S. envoy on North Korea affairs, said on Monday during a visit to Seoul that Washington is willing to meet North Korea “anywhere, anytime without preconditions.”

But Sung Kim stressed that the Biden administration would continue to sanction North Korea over its nuclear and missile programs.

Shin Beomchul, an analyst with the Seoul-based Korea Research Institute for National Strategy, said North Korea has been communicating the same message for months—that it has no intention to return to talks unless the United States offers meaningful concessions, likely in the form of eased economic sanctions.

The deadlock “could be prolonged unless there’s a change in the conditions facing the North [Korea], such as greater economic or pandemic-related difficulties,” Shin told the Associated Press.

Ned Price, a spokesperson from the Department of States, responded on Tuesday that Kim Yo Jong’s words “have not changed our view on diplomacy.”

“We remain prepared to engage in principal negotiations with [North Korea] to deal with the challenge of its nuclear program,” Price said. “Our policy is not aimed at hostility. It’s aimed at solutions. And it’s ultimately about achieving the complete denuclearization of the Korean Peninsula.  And to do that, it takes a calibrated, practical approach—it’s open— that’s open to and will explore diplomacy with [North Korea] to make progress that above all increases the security of the United States, of our allies, of our deployed forces as well.”

Former President Donald Trump and Secretary of State Mike Pompeo tried to exert great pressure on Xi Jinping and the Chinese regime—knowing sanctions without China’s cooperation could only have limited impact.

China has been North Korea’s biggest trading partner for decades and is still making up 90 percent of its trade volume.

In his first address to a joint session of Congress, President Joe Biden said his administration would address North Korea’s threat through “diplomacy and stern deterrence.”