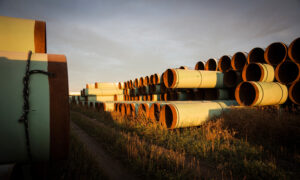 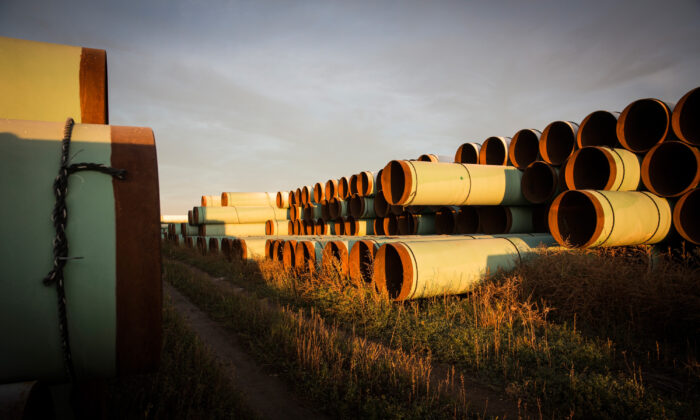 Miles of unused pipe, prepared for the proposed Keystone XL pipeline, sit in a lot outside Gascoyne, N.D., on Oct. 14, 2014. (Andrew Burton/Getty Images)
US News

The company behind the Keystone XL Pipeline, which was blocked by the Biden administration earlier this year, has officially pulled out of the project.

TC Energy, which is based in Calgary, Canada, provided few details as to why it’s pulling out of the project, which was first proposed in 2008 and would carry hundreds of thousands of barrels of oil per day from Canada into the United States. The firm said construction activities were suspended on President Joe Biden’s first day in office on Jan. 20.

According to a news release, the company said it “will continue to coordinate with regulators, stakeholders, and Indigenous groups to meet its environmental and regulatory commitments and ensure a safe termination of and exit from the Project.”

“We value the strong relationships we’ve built through the development of this project and the experience we’ve gained. We remain grateful to the many organizations that supported the project and would have shared in its benefits,” TC Energy CEO François Poirier said in a statement.

“This is a landmark moment in the fight against the climate crisis,” Jared Margolis, a senior attorney at the Center for Biological Diversity, said, according to Reuters. “We’re hopeful that the Biden administration will continue to shift this country in the right direction by opposing fossil fuel projects.”

Biden faced significant blowback from Republicans and industry groups after signing the executive order blocking the pipeline. Critics have said tens of thousands of jobs were lost essentially overnight by the pipeline’s cancellation.

While asserting that the Keystone project “would not serve the U.S. national interest,” Biden said that his Jan. 20 order is designed to “promote and protect our public health and the environment, and conserve our national treasures and monuments, places that secure our national memory.”

The pipeline was slated to carry 830,000 barrels of oil per day from the Alberta oil sands to Nebraska. Environmentalists, Native Americans, and some landowners had opposed the move.

“We remain disappointed and frustrated with the circumstances surrounding the Keystone XL project, including the cancellation of the presidential permit for the pipeline’s border crossing,” Alberta Premier Jason Kenney said in a June 9 statement. Reports said that the province had invested roughly $1.1 billion in the pipeline, which means it’ll now have to take a loss on the project.

Republicans have already seized on TC Energy’s announcement and have pointed to the recent ransomware attack that shut down the Colonial Pipeline system for several days. The incident triggered mass gasoline shortages while causing prices to skyrocket.

Barrasso noted that as “gasoline prices are spiking, the White House is celebrating the death of a pipeline that would have helped bring Americans relief.”

Roughly 2o Republican-led states filed a lawsuit against the Biden administration over the pipeline construction suspension.