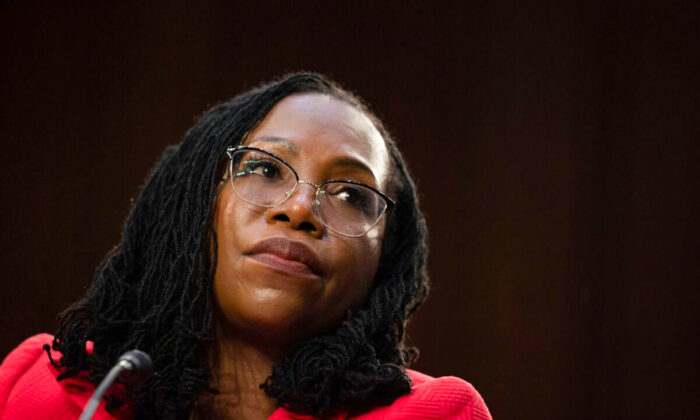 Judge Ketanji Brown Jackson testifies before the Senate Judiciary Committee on her nomination to serve on the Supreme Court, in Washington on March 22, 2022. (Jim Watson/AFP via Getty Images)
Congress

President Joe Biden’s Supreme Court nominee on March 22 refused to define what a woman is or say whether she agreed that punishments for possessing or distributing child pornography should be strengthened.

Judge Ketanji Brown Jackson was asked during day 2 of her confirmation hearings whether she could provide a definition of the word “woman.”

Jackson sits on the board of Georgetown Day School, where students as young as 5 are taught they can choose to be a different gender, Sen. Marsha Blackburn (R-Tenn.) said.

She then asked Jackson if she agreed with the late Justice Ruth Bader Ginsburg, who said in a decision that “physical differences between men and women are enduring.” Jackson said she could not, because she was not familiar with the case.

After Jackson refused to provide a definition of what a woman is, Blackburn said, “The meaning of the word woman is so unclear and controversial that you cannot give me a definition?”

“In my work as a judge, what I do is I address disputes. If there is a dispute about a definition, people make arguments, and I look at the law, and I decide,” the judge said.

“The fact that you cannot give me a straight answer about something as fundamental as what a woman is underscores the dangers of the kind of progressive education that we are hearing about,” Blackburn said, pointing out that Lia Thomas, a biological male, was permitted to race against women in the national college championships earlier this month, drawing widespread criticism.

During Tuesday’s hearing, Jackson also declined to oppose expanding the size of the Supreme Court. Both Ginsburg and Justice Stephen Breyer, who Jackson will replace if she is confirmed by the Senate, have spoken out against the proposal, which is primarily favored by Democrats.

“I have opinions about a lot of things. I don’t have an opinion that I think is appropriate to share,” Jackson told Sen. John Kennedy (R-La.). “I worked very hard to set aside my opinions when I’m thinking about cases, which is the work of a judge. So, this particular issue is one that is very contentious, as you say, one that’s in the province of Congress, and one that I think it’s not appropriate for me to comment on.”

Jackson used similar reasoning to decline to say if she supports imposing harsher punishments for child pornography-related crimes. While a judge, Jackson has given defendants in such cases a sentence on average 47 percent lower than what prosecutors recommended, according to an analysis from Sen. Ted Cruz (R-Texas).

After the judge defended the disparity, Sen. Tom Cotton (R-Ark.) inquired whether the United States should strengthen or weaken punishments for child pornographers.

“I have to say, judge, I think whether or not we should strengthen or weaken sentences for child pornographers is a pretty simple question, but I’ll move on,” Cotton said.