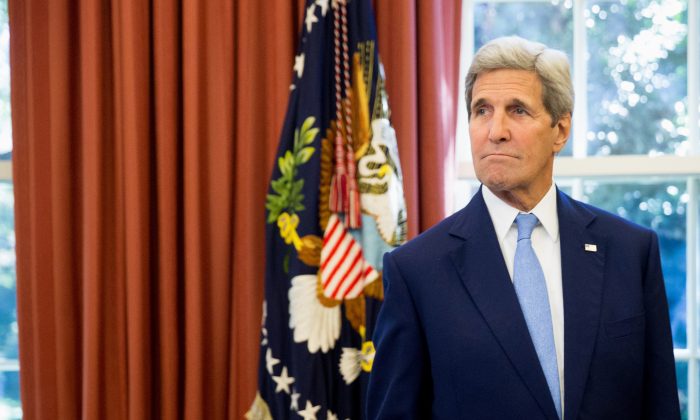 Secretary of State John Kerry in the Oval Office of the White House on Sept. 15, 2015. (AP Photo/Andrew Harnik)
Asia & Pacific

ASHGABAT, Turkmenistan—Turkmenistan’s rituals range from the bizarre to the brutal. The Central Asian nation has more marble buildings than anywhere and recently erected a seven-story, golden statue of its president on horseback, while human rights groups say it employs electric shocks, rape and forced intake of psychotropic drugs as torture techniques.

Yet for all the mockery and criticism, Turkmenistan also is rich in gas reserves and relatively stable. And positioned just north of Afghanistan and Iran, it has made itself a valuable partner for the United States in a dangerous part of the world.

For these reasons, U.S. Secretary of State John Kerry ventured Tuesday to a place few world leaders and even fewer journalists or human rights monitors ever see, dangling the opportunity of greater U.S. investment, expanded security cooperation and a strategic counterweight to nearby Russia and China if the government improves its human rights record.

Kerry issued a similar offer earlier in the day in Tajikistan, echoing weekend pitches in Kyrgyzstan, Uzbekistan and Kazakhstan. Speaking Monday at Kazakhstan’s Nazarbayev University, he addressed the challenge facing the region’s governments, particularly as they respond to the threat of expanded Islamic State activity.

“The terrorist presence alone doesn’t give authorities a license to use violence indiscriminately,” he told a crowd that included the Kazakh prime minister, senators, foreign diplomats and students. He said fear about extremist groups “is not a legitimate excuse to lock up political opponents, diminish the rights of civil society or pin a false label on activists who are engaged in peaceful dissent.”

Although the five “Stans” vary significantly in development and openness, rights groups and Kerry’s own State Department say each routinely abuses human rights.

Turkmenistan, which consistently ranks among the most corrupt nations and isolates itself in a way that draws comparisons to North Korea, is arguably the worst of the bunch. But Western nations, like Russia and China, continue to engage the country, in part because it holds some of the world’s deepest gas reserves.

With almost no independent scrutiny in the country, it is impossible to determine how many political prisoners the government is holding. Some have disappeared in prisons, cut off from contact with their families and the outside world, rights campaigners say. Lately, the government has been seizing private satellite dishes to prevent outside information from entering.

No secretary of state had visited Turkmenistan since James Baker in 1992. Kerry’s trip was brief, with only one event: A meeting with President Gurbanguli Berdymukhamedov.

“In the gold domed presidential palace, Berdymukhamedov hailed the new “dynamic relationship” between Turkmenistan and the United States.

Kerry said, “We can do more together to help your people develop some of the skill sets necessary in this modern economy.”

Berdymukhamedov, whose official title is Arkadag, or “Protector,” has ruled Turkmenistan with an iron fist for almost a decade, controlling all aspects of life in the mostly Muslim nation of 5 million people on the Caspian Sea. Citizens sing songs in Berdymukhamedov’s honor. Imams pray for him.

In Central Asia, Kerry Talks to Autocratic Cast of Nations

But the 58-year-old former dentist is seen as an improvement from his predecessor, Saparmurat Niyazov, or Turkmenbashi, the “Father of the Turkmen.”

Niyazov took control during Turkmenistan’s final years in the Soviet Union and led until his death in 2006, renaming cities, streets, months, periodicals and public organizations after himself and family members, and writing a two-volume spiritual tome that became mandatory reading.

Berdymukhamedov has reversed some of these steps, including a ban on opera—though not reportedly on ballet. In some ways, the personality cult has merely been transferred. Whereas Niyazov erected a monument of himself with open arms that rotates with the sun, Berdymukhamedov’s grandest statue is 69 feet tall and includes his likeness emblazoned in gold, riding a stallion.

Kerry insisted that U.S. interest in Turkmenistan and its neighbors isn’t an effort to revive the “Great Game,” the 19th-century battle Britain and Russia waged for influence and control of the region’s resources—a metaphor still referenced today.

And Washington wants a foothold for when that happens.

To justify the outreach, American officials say China and Russia cannot be relied on to push the region’s governments toward greater accountability and fairer treatment of minorities and opponents. And they say the U.S. can help with security assistance sought by all, if authorities don’t use counterterrorism to rationalize broad clampdowns on dissent.

Right now, the main U.S. security contribution in Turkmenistan is support for the Organization for Security and Cooperation in Europe’s training of officers to counter threats coming from Afghanistan, south of the frontier. In Tajikistan, another northern neighbor of Afghanistan, Kerry said the U.S. is targeting “drivers of radicalization” and training and equipping border guards to prevent extremists from penetrating the country.

In the Tajik capital of Dushanbe, Kerry held a similar set of discussions Tuesday with President Emomali Rahmon, who faces little opposition after more than two decades in power. The government recently banned the opposition Islamic Renaissance Party and arrested 78 of its members. Its efforts against anyone perceived as a radical Islamist include penalties for long beards.