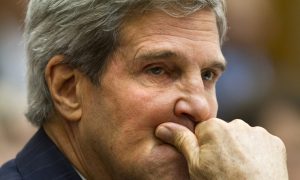 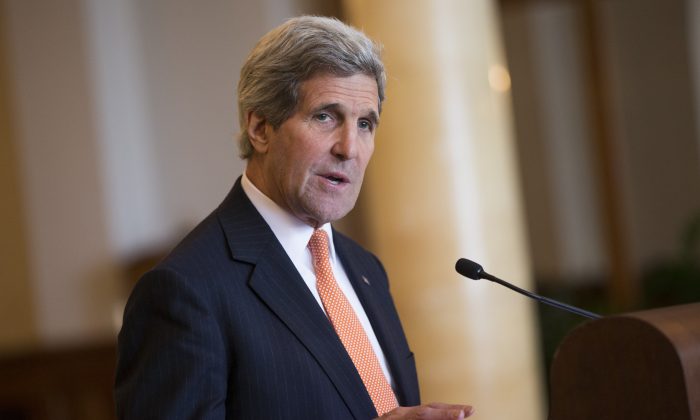 US Secretary of State John Kerry delivers remarks at the conclusion of another round of nuclear negotiations with Iranian Foreign Minister Mohammad Javad Zarif, on Wednesday, March 4, 2015, in Montreux, Switzerland. (AP Photo/Evan Vucci)
Africa

CAIRO—Secretary of State John Kerry is in Cairo for security talks with Egyptian officials before heading to Qatar to try to ease Arab concerns about the Iran nuclear deal.

Kerry arrived in the Egyptian capital on Saturday and on Sunday will resume a U.S.-Egypt strategic dialogue that was suspended in 2009 due to political unrest.

Despite continuing human rights concerns, the Obama administration is increasing military assistance to Egypt as it confronts growing threats from extremists, particularly on the Sinai peninsula. On Friday, the U.S. delivered eight F-16 warplanes to Egypt, part of a military support package.

John Kerry Not Above the Law, Gets Ticket for Not Shoveling Snow

Sinai-based militants have been launching increasingly sophisticated attacks in recent months that have killed dozens of Egyptian soldiers and police. The latest wave of violence began after the military overthrew Islamist President Mohammed Morsi two years ago.

U.S. military assistance to Egypt had been on hold until earlier this year due to human rights and democracy concerns in the wake of the coup, but was resumed by the administration for national security reasons.

Some lawmakers and numerous advocacy groups are urging Kerry to raise human rights issues with Egyptian authorities, including the arrests of dissidents and journalists, mass trials, and sentencings of Morsi supporters. U.S. officials said those concerns would be raised at all of Kerry’s meetings in Cairo and noted that the State Department’s top diplomat for human rights and democracy would be accompanying him.

Ahead of his trip, Kerry met on Thursday in Washington with Egyptian-American Mohammed Soltan, who had been sentenced to life in prison in Egypt for financing an anti-government sit-in and spreading “false news.” One of thousands imprisoned after the 2013 military overthrow of Morsi, Soltan had been on a hunger strike for more than a year before being freed in May after repeated U.S. requests. He is the son of a prominent member of the now-outlawed Muslim Brotherhood.

The State Department said Kerry and Soltan discussed his experience in prison and “the importance of distinguishing between peaceful dissent and violent extremism in the fight against terrorism.” In the meeting, Kerry “reaffirmed America’s commitment to promoting respect for human rights and space for civil society as part of our engagement with Egypt,” the department said.

Broadening U.S.-Egyptian trade and economic ties will also be on the table during Kerry’s visit, which comes just days before Egypt inaugurates a second, parallel waterway to allow two-way traffic on the Suez Canal. Egyptian officials are hoping the opening will boost a flagging economy.

From Cairo, Kerry will travel on Sunday to Doha, Qatar, for talks with Gulf Arab foreign ministers whose countries are wary of the nuclear deal with Iran.

Officials say the Doha discussions are primarily designed to follow-up on a May meeting that President Barack Obama hosted for Arab leaders at Camp David, at which the U.S. promised enhanced security cooperation and expedited defense sales to guard against a potential Iranian threat. The officials, who spoke on condition of anonymity because they were not authorized to discuss Kerry’s trip publicly, said the talks in Qatar would take stock of progress made on those goals, particularly since the Iran deal was signed.

One U.S. official said Kerry would use the meeting with the foreign ministers of the Gulf Cooperation Council to “try to respond to any remaining questions they might have, hopefully satisfy them and ensure that they are supporting our effort going forward.”

Iranian Foreign Minister Mohammad Javad Zarif visited Kuwait, Qatar and Iraq in a similar tour earlier this week to talk to his counterparts about the Iran deal.

Saudi Arabia is the largest and most influential member of the council and has been publicly supportive of the Iran deal, albeit with reservations. Just this week, the State Department authorized the sale to Saudi Arabia of $5.4 billion in Patriot missiles and related equipment along with $500 million in ammunition.

In addition to Iran, Kerry and the Arab ministers are expected to look closely at the situation in Syria and Iraq, which continue to be ravaged by conflict and the spread of the Islamic State extremist group, the officials said. Kerry will also meet separately in Doha with Russian Foreign Minister Sergey Lavrov to discuss Syria, Iran and the ongoing crisis in Ukraine.

Despite the focus on Iran, Kerry’s itinerary does not include Israel, America’s foremost Mideast ally and the primary foreign opponent of the Iran agreement.

U.S. officials rejected suggestions that bypassing Israel signaled that the Obama administration had given up trying to convince Israeli leaders of the merits of the Iran deal. They noted that Defense Secretary Ash Carter had visited the Jewish state in mid-July and say that contacts with Israeli officials continue to be robust.

The last time Kerry spoke with Israeli Prime Minister Benjamin Netanyahu was on July 16, two days after the Iran deal was sealed.