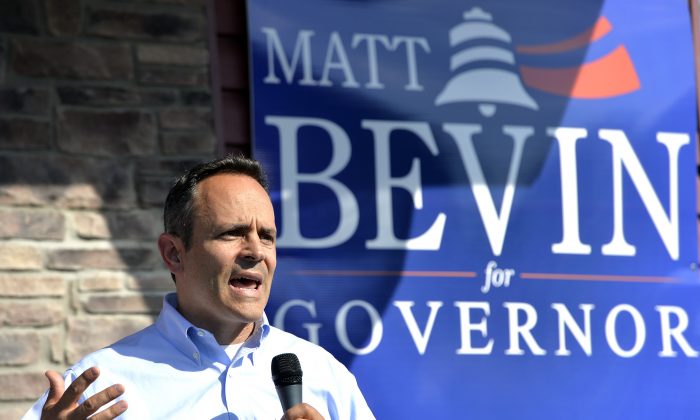 In this Aug. 21, 2015 file photo, Kentucky Republican Gubernatorial candidate Matt Bevin addresses his supporters from the steps of his campaign headquarters in Somerset Ky. (AP Photo/Timothy D. Easley)
US

FRANKFORT, Ky.—Kentucky’s new Republican administration is moving forward with plans to shut down the state’s health insurance exchange, becoming the first state to cut ties with one of the key pieces of President Barack Obama’s signature health care law because of a political promise.

Gov. Matt Bevin notified federal officials in a letter dated Dec. 30 that the state exchange will cease operations “as soon as is practicable.” That will be at least a year from now, according to federal law. It will not affect health plans sold for 2016.

Kentucky is one of 14 states that run their own state health insurance exchanges. More than 100,000 people have used Kentucky’s exchange, dubbed kynect, to purchase private health insurance plans with the help of a federal subsidy since it was implemented in 2013.

But Bevin, just Kentucky’s second Republican governor in more than four decades, campaigned on eliminating kynect. The system is paid for with a 1 percent tax on all individual health plans sold in the state, both on and off the exchange. Right now,Bevin says about 85,000 people have purchased a private health insurance plan through kynect, or about 2 percent of the population.

Bevin spokeswoman Jessica Ditto said the fees from the sale of plans on kynect generate between $2.5 million and $4 million of the approximately $27 million it takes to operate the exchange each year.

“A majority of Kentuckians are paying a 1 percent assessment on their own premiums to support kynect operations which they do not use,” Ditto said.

Once Kentucky moves to the federal exchange, that tax goes up to 3.5 percent. But the tax is only applied to plans sold on the exchange, Ditto said.

Kynect was viewed as a national model for other states and was a success story for a Democratic administration plagued by technical problems with the federal system. Former Democratic Gov. Steve Beshear created it with the help of about $290 million in federal grants. He has estimated it will take at least nine months and cost $23 million to dismantle the system.

“Kentucky’s State-based Marketplace has helped tens of thousands of Kentuckians shop for and purchase quality, affordable health insurance,” said Ben Wakana, a spokesman for the U.S. Department of Health and Human Services. “A successful transition from Kynect to the federal Marketplace will require strong cooperation and commitment from the state of Kentucky to its residents who have gained health insurance under the Affordable Care Act.”

Bevin’s plans do not affect kynect’s open enrollment period, which runs through Jan. 31. And it does not affect any plans that have been sold for 2016 or anyone who signed up for Medicaid coverage through the kynect site.

Next year, eligible Kentuckians who purchased subsidized private health plans can still purchase them, they just have to buy them from the federal system. The federal system has different plans with different rates than were offered on kynect.

Jason Bailey, executive director of the Kentucky Center for Economic Policy, calledBevin’s decision “a big step backward on access to health care in Kentucky.” Susan Zepeda, president of the Foundation for a Healthy Kentucky, said it “raises a lot of questions,” noting state officials had special programs targeting hard-to-reach groups, including veterans and rural residents.

“What will be done to sustain these access and equity gains under a new approach?” she said.

Bevin has also said he intends to overhaul the state’s expanded Medicaid program, which provided health care to 400,000 people and slashed the percentage of uninsured in the state by half.