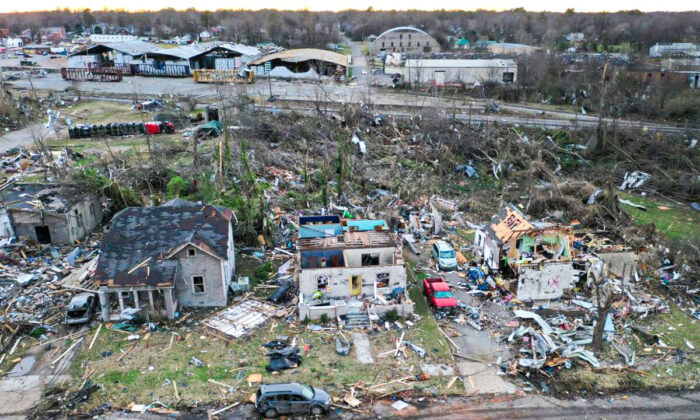 An aerial view of homes and business destroyed by a tornado in Mayfield, Kentucky on Dec. 11, 2021. (Scott Olson/Getty Images)
By Jack Phillips

The death toll from a tornado outbreak in Kentucky, which has left dozens of people dead over the weekend, is expected to rise, said Kentucky Gov. Andy Beshear, as rescuers continued to comb through fields of wreckage to find survivors on Sunday morning.

But that “number is going to exceed more than 100. This is the deadliest tornado event we’ve ever had,” Beshear continued. “We have half of some of our towns here in western Kentucky that are just gone. It’s hard to see,” Beshear added in a separate interview.

Starting on late Friday and into Saturday, tornadoes ripped through parts of Kentucky, which collapsed buildings, destroyed homes, and left thousands of people without power. One tornado that remained on the ground for hundreds of miles destroyed a candle factory, an Amazon distribution center, and a nursing home.

About 110 people were working at the candle factory in Mayfield when the tornado struck, but Beshear said Sunday that only about 40 people who were inside have been rescued. The governor said he’s skeptical that more people will be pulled out alive from the factory’s wreckage.

In Kentucky alone, 22 were officially confirmed dead by late Saturday, including 11 in and around Bowling Green. The toll of 36 across five states stood at six deaths in Illinois, where an Amazon facility was hit; four in Tennessee; two in Arkansas, where a nursing home was destroyed; and two in Missouri.

Illinois Gov. J.B. Pritzker confirmed the Amazon facility deaths, adding that about 45 people have been rescued. Edwardsville Fire Chief James Whiteford told reporters over the weekend that the rescue effort has turned into a recovery effort, and it will take days to complete.

Debris from destroyed buildings and shredded trees covered the ground in Mayfield, a city of about 10,000 in western Kentucky. Twisted metal sheeting, downed power lines, and wrecked vehicles lined the streets. Windows and roofs were blown off the buildings that were still standing.

“We hope there are still rescues to be made,” Mayfield, Kentucky, Mayor Kathy Stewart O’Nan told CBS News Saturday. “We fear that it is now just recovery.”

Kyanna Parsons-Perez, an employee at the factory, was trapped under 5 feet of debris for at least two hours until rescuers managed to free her.

In an interview with “Today,” Parsons-Perez said it was “absolutely the most terrifying” event she had ever experienced. “I did not think I was going to make it at all.”

President Joe Biden signed an emergency declaration for Kentucky, which allows the Federal Emergency Management Agency and other federal agencies to coordinate disaster relief efforts there. Department of Homeland Security Secretary Alejandro Mayorkas said Sunday morning that he is traveling to Kentucky to meet with Beshear and other officials.

“Whatever is needed, the federal government is going to find a way to supply it,” Biden said on Saturday.