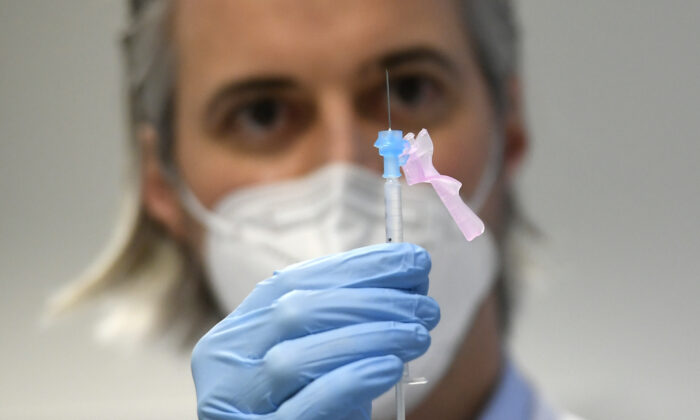 A doctor at the university hospital in Essen, western Germany, on Jan. 18, 2021. (Ina Fassbender/AFP via Getty Images)
Viewpoints

The Lancet—the world’s oldest medical journal—touts its mission as promoting “the best science for better lives.” Unfortunately, its current editors have steered the venerable publication into politically progressive ideological waters that have no relationship to “science.”

Most recently, it published a full-bore battle cry to impose “critical race theory” into health care.

Critical race theory (CRT) claims that everything in Western society is irredeemably tainted by the bigotry of “whiteness.” Hence, all our institutions and traditions are irreparably polluted by past and continuing “institutional racism.” Remediation isn’t sufficient. Mitigation only puts a bandage on the cancer. The only true cure is to demolish everything that has come before and rebuild from the ground up along “antiracist” lines.

CRT is the opposite of “diversity” and “tolerance.” It’s a bitter movement bent on vengeance against everything branded “white.” As my Discovery Institute colleague Chris Rufo—who has written extensively on CRT—puts it, “Critical race theory treats ‘whiteness’ as a moral blight and maligns all members of that racial group as complicit in oppression.” That now apparently includes the practice of medicine.

Such blatant bigotry should have no place in health care. Yes, special attention should be focused on ensuring that African Americans and other minorities don’t receive short shrift in receiving medical treatments, as they have historically. But doctors should care for each patient as equal individuals, without regard to race, unless it bears on the malady being cured or prevented.

So should public health initiatives. But don’t tell that to the authors—none of whom are medical doctors—who complain in the gobbledygook titled “Time to Take Critical Race Theory Seriously: Moving Beyond a Colour-Blind Gender Lens in Global Health” that “despite the purported racial reckoning of the moment, the global health community has been slow to consciously centre race” in the work of public health.

Readers need a translator in the peculiar language of “woke” to discern what they mean. They urge that race become a primary focus of “the concept of intersectionality” to describe “how multiple social categorizations—such as race and gender—interact to confer interlocking oppressions and privileges.”

More: “Like gender’s problematic binary of male versus female, race is a complex social construct with biological implications.”

As in gender ideology, biology is eschewed for entirely conjured sociological constructs. After all, the more victims the better, and the greater number of people who will be given a stake in deconstructing the West by becoming entitled to various methods of redress and reparation.

The world of critical race theory makes a Salvador Dali painting seem like realism. A list of the citations in the paper includes “Demarginalizing the Intersection of Race and Sex: a Black Feminist Critique of Antidiscrimination Doctrine, Feminist Theory and Antiracist Politics.”

Then there’s “Intersectionality and Global Gender Inequality.” Or how about this one for driving social schism? “A Global Critical Race and Racism Framework: Racial Entanglements and Deep and Malleable Whiteness.” Good grief.

Here’s a typical quote from that last, almost-impenetrable “scholarly” screed: “Deep and malleable whiteness is produced through the extension of white economic, political, and cultural power and the attempt of countries and groups to negotiate their racial structural and discursive positions by deploying forms of racial capital as an avenue to whiten.”

Or, as The Lancet’s authors put it, co-mingling their victimologies: “This racial consciousness needs to be part and parcel of our efforts to address gender inequity worldwide. … Only then will we develop an essential sense of humility and self-awareness to be antiracist in our work.”

That’s not anti-racist. It’s crass bigotry, unvarnished and cruel, and moreover, a blatant call to societal dissolution. Which, of course, is the point of revolutionary jargon.

I wonder if the editors understand the destructive logic of what they are publishing. The Lancet was founded in 1823 by Englishman Thomas Wakley. No matter how progressive Wakley might have been for his own time, he definitely wasn’t sufficiently woke for ours. Moreover, he was white and undoubtedly a believer in the gender binary—as have been the great majority of the publication’s editors over the past nearly 200 years.

Critical race theory thus holds that The Lancet is forever contaminated by past and ongoing bigotry. Publishing a call to impose CRT on the health care sector doesn’t change that. If they want to prove they are antiracist, the editors should follow Intersectionality Road by shuttering The Lancet, cleanse all whiteness from its publication like mold, and rebuild a new and critical race theory-edited journal that will, as the article put it, “redress racialized and gendered power imbalances.”

Basta! It’s bad enough that the high academy is steeped in various critical theory toxins. But it’s particularly alarming that critical race theory is becoming fashionable among the medical establishment. CRT will not heal one sick person, promote wellness, or effectively fight pandemic diseases. Rather, if allowed to take over the governance of the health sector, it will tear our medical systems apart.