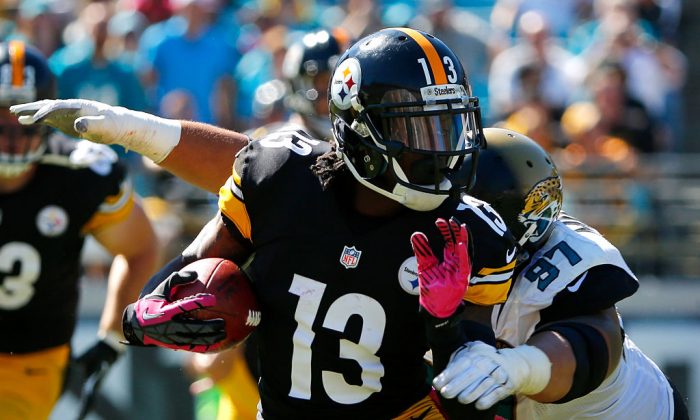 Roy Miller #97 of the Jacksonville Jaguars attempts to tackle Dri Archer #13 of the Pittsburgh Steelers on Oct. 5, 2014 in Jacksonville, Florida. (Sam Greenwood/Getty Images)
Crime and Incidents

Miller, 30, was booked into jail by the Jacksonville Sheriff’s Office on Saturday, Nov. 10, Fox News reported.

While no information has been officially released about the victim, Action News Jax reporter Kaitlyn Chana tweeted that the victim was Miller’s wife.

Judge ordered that Roy Miller be released today. He said Miller is allowed to make contact with his wife, but the judge said any violence towards her will break his release. @ActionNewsJax pic.twitter.com/pXtOH7DUd8

Court records indicated that the injury was minor.

Miller appeared in court later Saturday, and a judge said the victim was no longer pressing charges.

The judge ordered Miller’s release, and said he was allowed to contact the victim, but said if there is any violence toward the victim, then his release will be rescinded, Action News Jax reports.

Another hearing was set for Nov. 28, ESPN reported.

Roy Miller said in court he will be hiring an attorney. @ActionNewsJax @Chiefs @NFL pic.twitter.com/URHayJFVkp

The Jacksonville Sheriff’s Office Department of Corrections said that Miller was booked into the Duval County Jail at 4:53 a.m. local time.

The Chiefs responded to the news with a statement:

“This morning we were informed about an incident involving one of our players, Roy Miller. “We are still in the process of gathering details on the situation. We will have no further comment at this time.”

Miller played four years with the Jacksonville Jaguars before signing with the Chiefs Aug. 2.