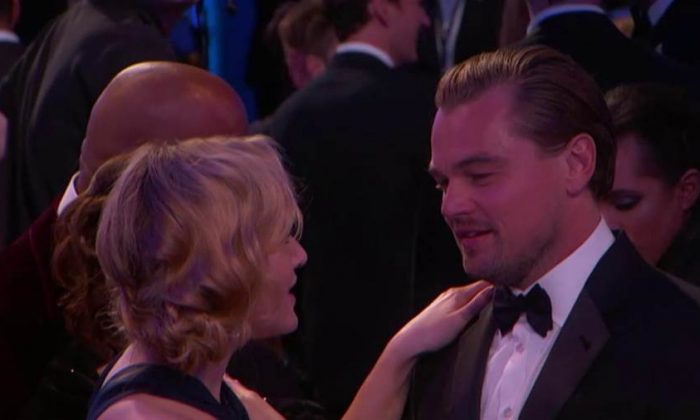 Kate Winslet and Leonardo DiCaprio Reunited at the Golden Globes

Years after starring in “Titanic” together, Kate Winslet and Leonardo DiCaprio reunited at the Golden Globe Awards on Sunday.

DiCaprio was part of a number of memorable moments, including an encounter with Lady Gaga.

But this was one the most heartwarming, perhaps of the entire evening.

The pair shared a wonderful hug, with many social media users commenting on how great it was to see.

Kate is the first to give Leo a big hug!!! #titanic #GoldenGlobes pic.twitter.com/zdUVHtBcTA

“I need to have a lot of therapy to talk about how much this Leo and Kate hug means to me,” said one Twitter user.

“Seeing leo dicaprio and kate winslet together is always one of the best parts of awards season,” said another.

Winslet and DiCaprio were the stars of “Titanic” (1997), with Winslet playing a betrothed 17-year-old aristocrat who falls in love with a penniless artist, played by DiCaprio, aboard the ill-fated ship.

Before the awards ceremony, DiCaprio told ET that Winslet and husband would be his companions for the evening. “She’s actually hanging out with me tonight,” he said. “We’re gonna go to the after parties together. We’re going to have a great time.”