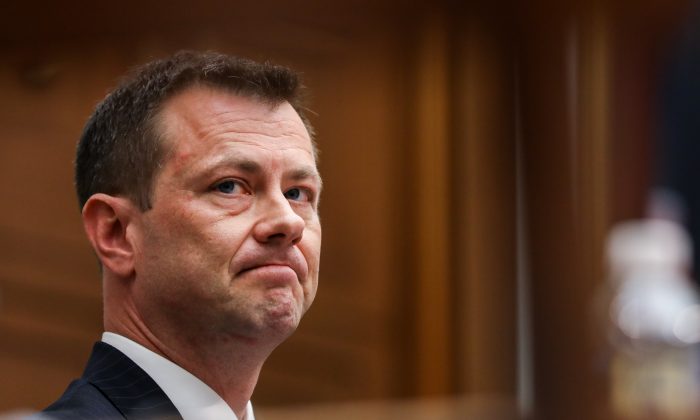 FBI Deputy Assistant Director Peter Strzok testifies at the Committee on the Judiciary and Committee on Oversight and Government Reform Joint Hearing on “Oversight of FBI and DOJ Actions Surrounding the 2016 Election" in Washington on July 12, 2018. (Samira Bouaou/The Epoch Times)
US News

Kash Patel: Former FBI Agent May Be Prosecuted Over Lies About Trump Investigation

“I think he’s got big trouble when it comes to, from a prosecution perspective,” Patel said on his EpochTV show “Kash’s Corner.”

Patel, a former federal prosecutor who helped uncover the origins of sketchy claims about Trump, reached the conclusion after reviewing newly released notes taken during a 2017 meeting.

The notes indicate that Strzok claimed that an Australian official, Alexander Downer, raised concerns with the United States about a meeting he had with George Papadopoulos, a Trump campaign adviser, after hearing Trump say during an event that he hoped Russia would be able to find missing emails from the servers of Hillary Clinton, Trump’s top rival for the presidency at the time.

Tashina Gauhar, an associate deputy attorney general who was at the meeting, wrote that there was a “friendly liaison,” referring to Downer, that communicated that “Papadopoulos said Trump campaign could release info hurtful to H,” in apparent reference to Clinton.

She also wrote that after the release of materials from the Democratic National Committee (DNC)—the committee has said the materials were hacked—and Trump’s comment to Russia, the “foreign service remembers conversation + reaches out to FBI.”

In another set of notes, Scott Schools, a deputy attorney general, indicated Strzok took point in talking about the matter during the meeting, using his initials.

“PS: Papadopoulos in May. Trump team received suggestion from R that it could assist Trump team by having info that would embarrass Clinton and Obama. We start seeing release of DNC hack. Trump if you’re listening. We open up umbrella investigation—Crossfire Hurricane,” Schools wrote.

Crossfire Hurricane was the counterintelligence probe looking into alleged ties between Trump, his campaign, and Russia.

Strzok, who headed the FBI’s Counterespionage Section, ran the FBI’s probe into Clinton’s unauthorized use of a private email server. He was one of the top officials on the Crossfire Hurricane probe, and took part in special counsel Robert Mueller’s investigation into Trump and Russia.

According to Mueller and Department of Justice watchdog Michael Horowitz, Downer conveyed details of his talk with Papadopoulos on July 26, 2016.

Trump didn’t make his public remarks about Russia until July 27, 2016.

Strzok gave the same false information about the timeline in his book and while promoting the book after its publication in 2020 following his termination from the FBI.

Patel said that not only did Strzok convey false information in the book and on television, but he included falsehoods in submissions to the secretive court authorized by the Foreign Intelligence Surveillance Act (FISA) when seeking warrants to surveil Trump campaign personnel.

“Those lies carried over from the start of the investigation in the summer and spring of 2016 all throughout the four FISA warrants, and these notes show in March of 2017, when this meeting occurred … that he perpetuated and continued that lie, even though he knew it was false,” Patel said. “He repeatedly lied to federal officers and judicial officers at the FISA court saying ‘our investigation is righteous for these reasons’ and he got caught. Then he wrote a book and sold it and the mainstream media let them have at it. And now John Durham has caught him lying.”

The notes were filed as submissions by lawyers representing Michael Sussmann, a lawyer who was working for Clinton’s campaign in 2016 when he took unverified claims about Trump and Russia to Baker, the FBI lawyer.

Sussmann is set to go on trial this month for allegedly lying to the FBI. According to a text message Sussmann sent to Baker before the meeting, Sussmann claimed not to be bringing the information on Trump on behalf of a client, when he was actually directed to do so by his client or clients.

Strzok told a conference in 2020 that he did get the timeline wrong. He called it “a little error” and “an honest mistake.”

“I think it’s a little arrogant that a 17-year agent of the FBI, the number two counterintelligence agent for the entire Federal Bureau of Investigation, the individual charged by the FBI, James Comey, and Andy McCabe to run, not just the Trump investigation but the Hillary Clinton email server investigation, got a date, a date of important significance wrong, as ‘a little error.’ That is a gargantuan lie,” Patel said. “And Peter Strzok has gotten caught. And that’s probably why the defense isn’t going to call him as a witness because he would get shredded on cross-examination.”