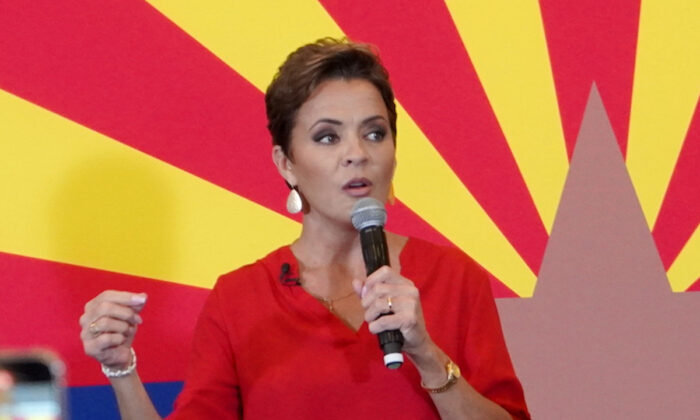 “The way they run elections in Maricopa County is worse than in banana republics around this world,” Lake, a Republican rising star, told the Daily Mail.

Lake was responding to Arizona Attorney General Mark Brnovich’s office opening an inquiry (pdf) into polling issues in Maricopa County, which includes Phoenix and other cities, following ballot-tabulation issues that were confirmed by Maricopa County officials on Nov. 8. Assistant Attorney General Jennifer Wright demanded that evidence be turned over “on or before Maricopa County submits its official canvass to the Secretary of State.”

As of the morning of Nov. 20, Lake was trailing Democrat Secretary of State Katie Hobbs by about 18,000 votes. Last week, Hobbs declared victory in the race.

Lake, a former anchor for FOX10 in Phoenix, told the Mail that she believes “at the end of the day, this will be turned around.”

“I don’t know what the solution will be but I still believe I will become governor, and we are going to restore honesty to our elections,” she said.

On Nov. 17, Lake said she would continue her fight in the state’s governor’s race after Hobbs declared victory.

“Now I’m busy here collecting evidence and data. Rest assured I have assembled the best and brightest legal team. And we are exploring every avenue to correct the many wrongs that have been done this past week,” she said. “I’m doing everything in my power to right these wrongs. My resolve to fight for you is higher than ever.”

Since then, Lake has posted videos from voters who say they experienced issues during Election Day.

On Nov. 19, Wright wrote to Maricopa County about printer problems on Election Day, which reportedly sparked confusion among voters. Maricopa County official Bill Gates and Recorder Stephen Richer on Nov. 8 told reporters that a printer issue was to blame and instructed affected voters to place their ballots in drop boxes.

“These complaints go beyond pure speculation, but include first-hand witness accounts that raise concerns regarding Maricopa’s lawful compliance with Arizona election law,” Wright wrote. “Furthermore, statements made by both Chairman Gates and Recorder Richer, along with information Maricopa County released through official modes of communication appear to confirm potential statutory violations of title 16.”

Hobbs declared victory earlier in the week after The Associated Press and other news outlets called the race for her.

A spokesperson for her office told local media last week that she’s preparing a transition team.

“Our job is to find the people who are, whether they’re Democrat, independent, Republican … that reflect Arizona, reflect the diversity of Arizona, and can help deal with some of the challenges that the administration will face,” spokesman Mike Haener said.

In the leadup to the election, Hobbs faced criticism from Lake and other Republicans for not recusing herself from handling the state’s election duties. Two former Arizona secretaries of state had told Time magazine that she should have stepped away from those duties.

But Hobbs, in several interviews, said that her decision wasn’t out of the ordinary.

“Elected secretaries of state in Arizona have overseen elections where they’re on the ballot since statehood. This has never been an issue until now,” Hobbs told CNN several weeks ago.