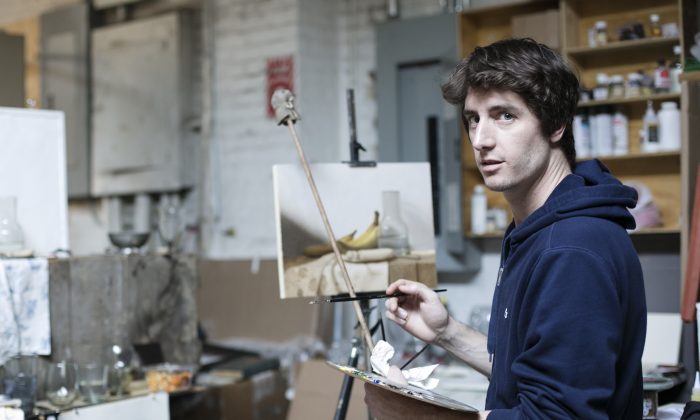 A glimpse into the atelier art movement
By Milene Fernandez
Print

NEW YORK—He finds inspiration just walking through a little grocery store in his neighborhood. Some lemons with stems and leaves still attached to them—as if just picked off of a tree—caught his interest, so much so that he decided to paint them. Those lucky lemons were destined more to nourish the soul than to serve as garnish.

A few days later, the leaves and the lemons shriveled. “You just have to figure out ways to deal with the fleeting nature of things,” Justin Wood said while looking at his still life arrangement at Grand Central Atelier, where he paints and teaches. Some fresh leaves were stapled to a board substituting, for reference.

Wood has been creating a couple of paintings for a group show at Eleventh Street Arts in Long Island City, opening on April 15, and a collection for his first solo show at Collins Galleries on Cape Cod, opening on July 30. The 33-year-old painter, soon to become a father, is the second generation of artists at the atelier who are mentored in the tradition of the old masters.

Equally proficient at figure and portrait painting, Wood recently turned to still-life painting, initially for practical reasons. (If you are going to paint from life, buying fruit is more affordable than paying a model). He admires the work of Rembrandt and Caravaggio. More recently he’s been inspired by the 17th century Dutch still-life painters, like Pieter Claesz, Jan Davidsz de Heem, and Willem Kalf.

“Pieter Claesz often used earth tones, simple and calm compositions. There’s something about those paintings that I really love, the sort of moods that they created,” Wood said. If you would add a Persian rug, stale bread crumbs, some moldy cheese, a nautilus cup, a piece of china, and some unidentifiable lavish objects to Wood’s still-life ensembles, his paintings could pass for a 17th century Dutch paintings.

Still, Wood is a contemporary artist at a humble, yet blossoming beginning with many years ahead for him to further develop his vision. He started to sell his paintings through galleries just two years ago.

Looking at any of his paintings can instill immediate calm and peace, even with their little hint of drama. They seem nostalgic for the 17th century to some degree, but with calm detachment, as if suspended in waiting.

In any event, the calmness that they evoke is a welcome antidote now to the rush of distracting images pulsating from electronic screens that we subject ourselves to every day.

The finesse and subtlety evident in his reproduction of a grape, for instance, can evoke profound emotion. One may ask bewildered, how is that even possible?

First of all, he has dedicated himself full-heartedly to his art, rigorously honing his skills. At this time of ever-shorter attention spans, unlike other millenials, Wood is constantly extending his. He can easily concentrate and focus—getting into the zone and losing track of time.

He had to be especially patient with himself at the beginning of this apprenticeship with the atelier in 2007, when he wasn’t able to draw and paint the way he wanted to yet—striving for a very high standard. That standard increases endlessly.

“I think with anything, the more you do something and if you do get better at it, it becomes more enjoyable because you are succeeding more at it, and that makes you want to wake up the next day and do it again. Once you put the time in, the years and the hours, you start to express what you want to, and that’s pretty satisfying,” he said.

Wood can perceive, observe, and thoroughly study a kiwi—even considering how to paint the hairs on that fruit—for weeks.

“Texture is very challenging, but it’s a really fun thing to do. How do you make something look the way that it feels in life? There’s more to it than just understanding how the light falls across the object,” he said.

The kiwis on the wood surface were already shriveled and had to be replaced. “I wouldn’t eat food off of this,” he joked.

Every kiwi is different. “It becomes impossible to copy that thing, so I have to think about the attributes and universal qualities of what makes a kiwi a kiwi, or just anything, so there’s a benefit of that fleeting aspect of the perishables in that it forces you to think a little bit harder, and that gives you an opportunity to go beyond nature a little bit,” he said.

It’s as if he’s creating his own worlds—showing the ephemeral quality of things, reminding us of our vulnerability, our mortality—but what for? There are plenty of things and people we come across everyday without paying much attention to them. They don’t really move us in anyway.

In contrast to contemporary art that reflects a despondent world (that is, in the vein of Duchamp’s urinal, “Fountain”), Wood’s art invites moments of deep reflection and wonder, as an antidote to relentless distractions.

Ultimately and simply, his is an act of love and courage. He aims to create art that shows the best versions of people and things, even if those best versions couldn’t exist because they are so much better than reality. “I think people respond to that, and it just enriches their lives. It makes living better when you have beautiful things around you to look at,” he said.