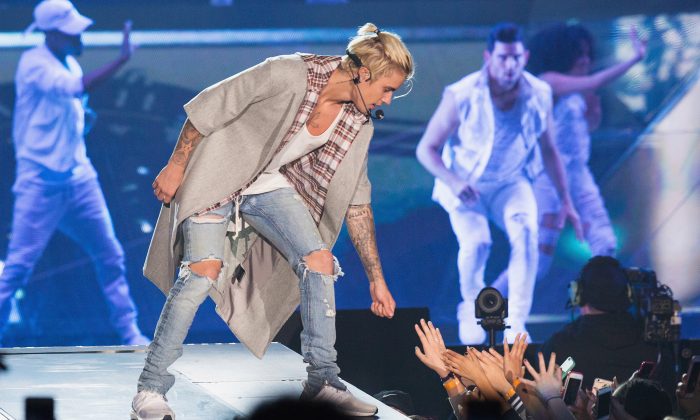 Justin Bieber Grabbed by the Throat by Rapper Post Malone, Who Is Touring With Him

Post Malone issues response, saying it was merely a joke
By Jack Phillips

Justin Bieber was allegedly grabbed by the throat by a rapper in a now-widely shared picture.

The 22-year-old singer was filmed allegedly trying to put out a cigarette on the arm of rapper Post Malone, who is one of the opening acts on Bieber’s Purpose tour.

He added (sic): “He’s my big brother and we like to rough house. if we was fighting someone would have done something instead of just sit around while the beibs gets chokeslammed [crying laughing emojis]. end of story i love jus more than life [heart emoji].”

The incident took place in a nightclub in Houston on April 9, 2016, where members of the Purpose tour were hanging out. Bieber was seen trying to put out a cigarette on Malone’s arm.

i was at the party where post malone choked out justin bieber, here’s a pic pic.twitter.com/rQtyMpDXmJ

Later, Malone was seen grabbing Bieber’s neck, and some people speculated that it was retaliation for the cigarette incident.

Malone is on tour with Bieber for most of his dates in North America until July.